Over the years, there have been a number of slightly different MOE borehole report forms that are submitted by well drillers - four are provide here (from the years: 1954, 1967, 1973 and 1995). Information on the forms remains mostly consistent and has been grouped into the following sections:

Note that the information recorded in the database (and described below) is not shown on these sheets but is rather assembled, for example, by: the type of location we’re describing (a borehole/well); the reassignment of purposes to a ORMGP code versus the original MOE code; where the quality-of-positioning codes can be found within the database; etc… Additional notes have been provided in many of these cases to avoid the confusion that these values/codes have been ‘issued’ by the MOE.

Affected tables (and their fields; ‘REF’ indicates a look-up table; values are taken from the 1973 example) include:

Note that at this time (1973) and right up until about 2008 when the use of GPS units became increasingly pervasive, the coordinates for a well were very rarely, if ever, provided by the driller. Rather, the Ministry employed students who would use the driller’s location map on the well record form to locate the well on a topographic map, and determine the UTM coordinates (in NAD 27 at the time) and elevation of the well. Accuracy would be based on the scale of topographic map

Additionally, multiple look-up (i.e. R_*) tables are accessed for populating some of the above fields (marked REF).

By default, the MOE records currently use the NAD83 geodetic datum.

The primary table and fields for dealing with borehole information (values are taken from the 1973 example), and the look-up tables referenced, include:

For describing the casing, the following tables and fields are used:

For any description of the plug, this record has very little information provided with respect to either the sand pack that is set around the screen or with respect to the seal/plug. This is very common for the MOE records so that many wells will not have any of these elements populated into the database. In the case of this 1973 well record, it appears that there was some kind of seal put into the well but the depths can not be determined. Certainly with a 20 slot screen set at 155 to 212 feet below ground, there would not be any seal across this interval. So the plug information that indicates a 0 to 213 ft seal is inaccurate. The same series of tables would be used, if the information was available, albeit with modified codes.

Note that D_BOREHOLE is linked to D_LOCATION based upon LOC_ID. D_BOREHOLE_CONSTRUCTION, however, uses BH_ID which is found (as a randomly assigned integer value) in D_BOREHOLE. Screen information is related to intervals, not construction details.

The primary table and fields for dealing with geologic information, and the look-up tables referenced, include:

Water levels are tied to intervals in the form of ‘screen’ intervals. The primary table and fields for dealing with water levels (values are taken from the 1973 example), as well as the look-up tables referenced, include:

D_INTERVAL contains the LOC_ID necessary to tie back to the D_LOCATION table. All intervals, though, are accessed through an INT_ID also found in D_INTERVAL. ‘Water Found’ information (i.e. Water Description - Kind Of Water) is stored in the D_GEOLOGY_FEATURE table.

The primary table and fields for dealing with geologic information (values are taken from the 1973 example), and the look-up tables referenced, include:

Note that D_PUMPTEST is tied to D_INTERVAL using INT_ID. D_PUMPTEST_STEP uses, instead, the PUMP_TEST_ID which links to D_PUMPTEST. D_PUMPTEST_STEP records any changes in the pump rate over the entire pumping interval (e.g. for step tests). The water levels recorded during pumping are stored in the D_INTERVAL_TEMPORAL_2 table as follows

Note that there will be multiple recorded water levels, one for each 15 minute period and a final reading after 24 hours (making five records in total). These are in addition to the Static Water level which is also reported. 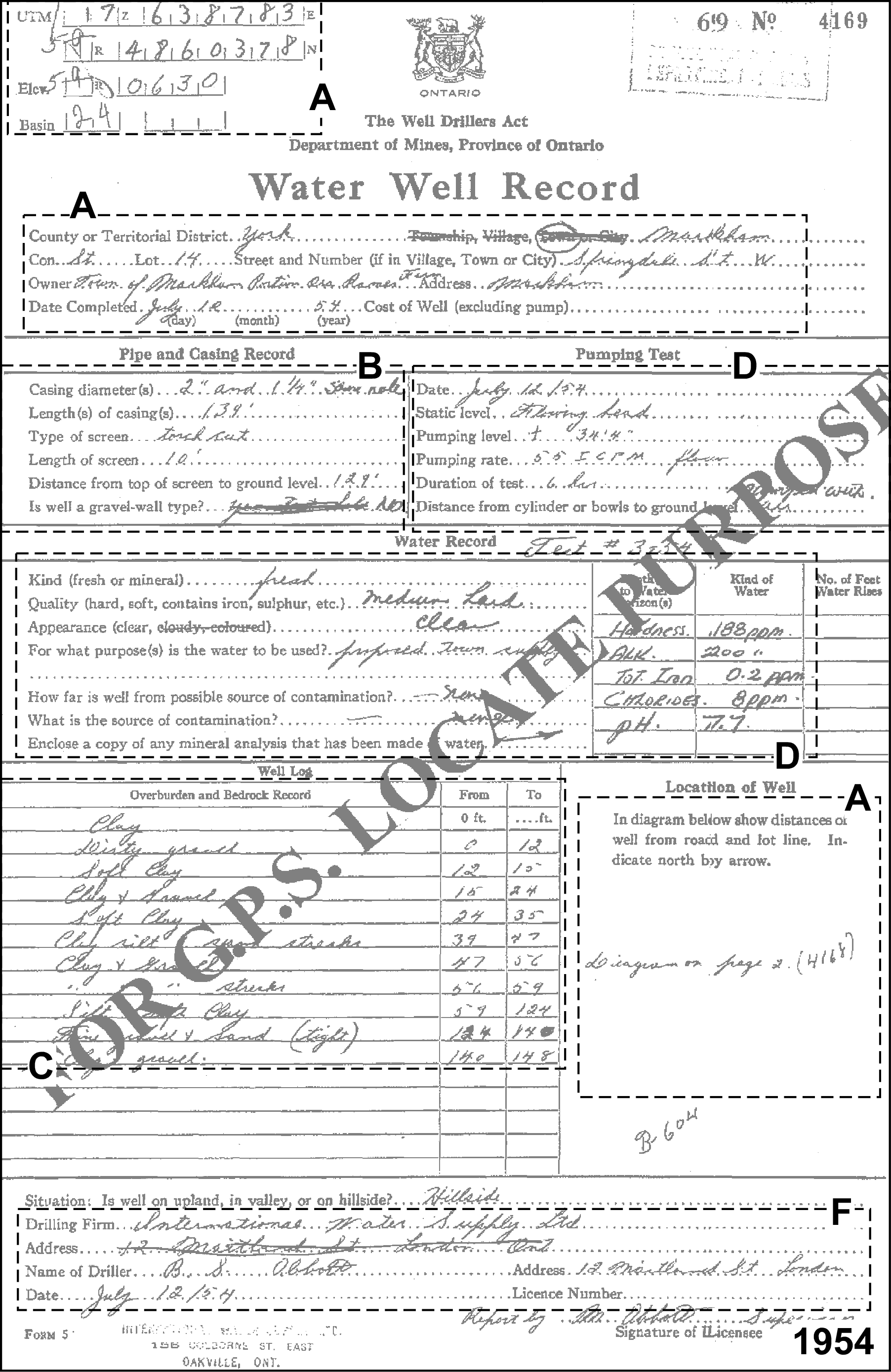 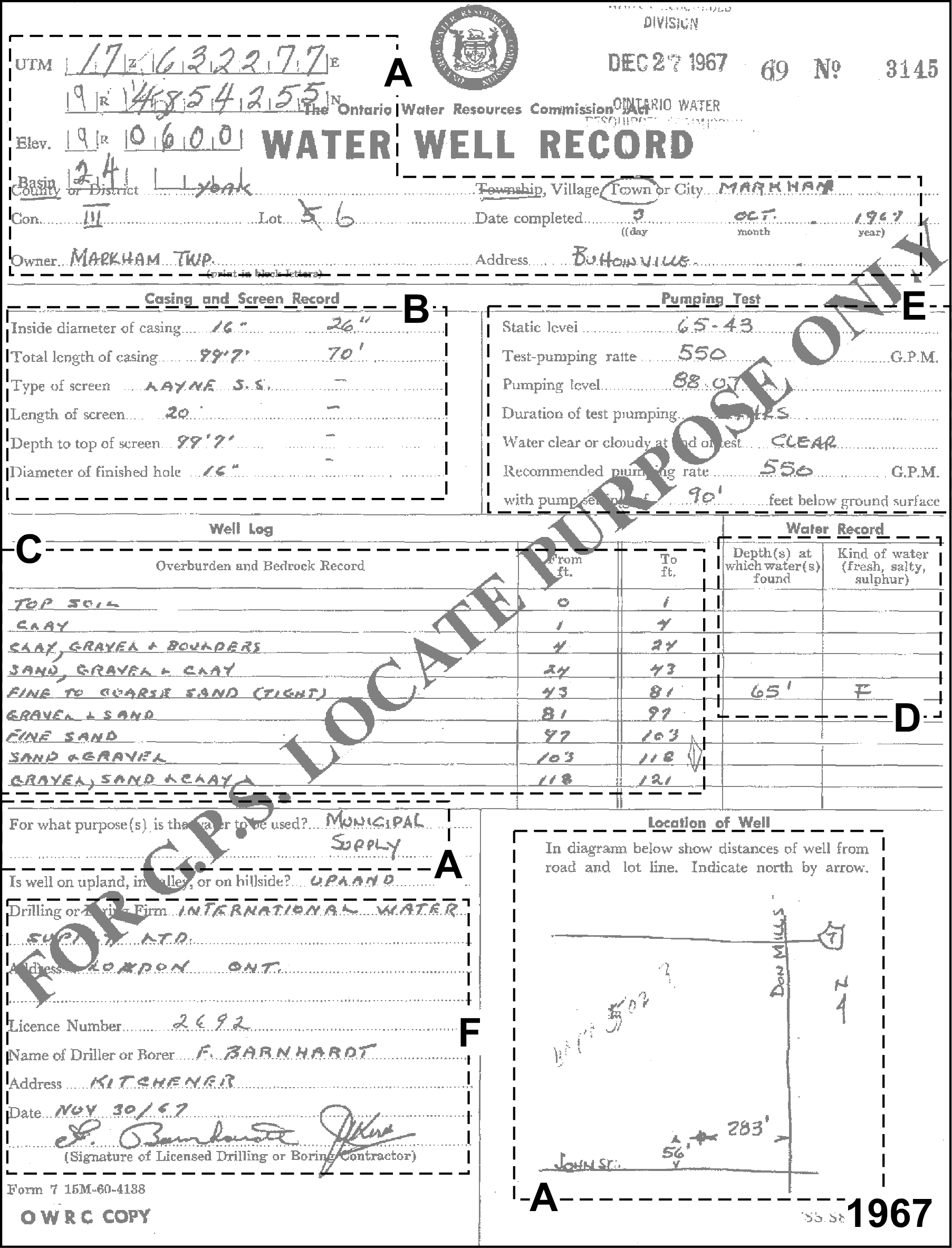 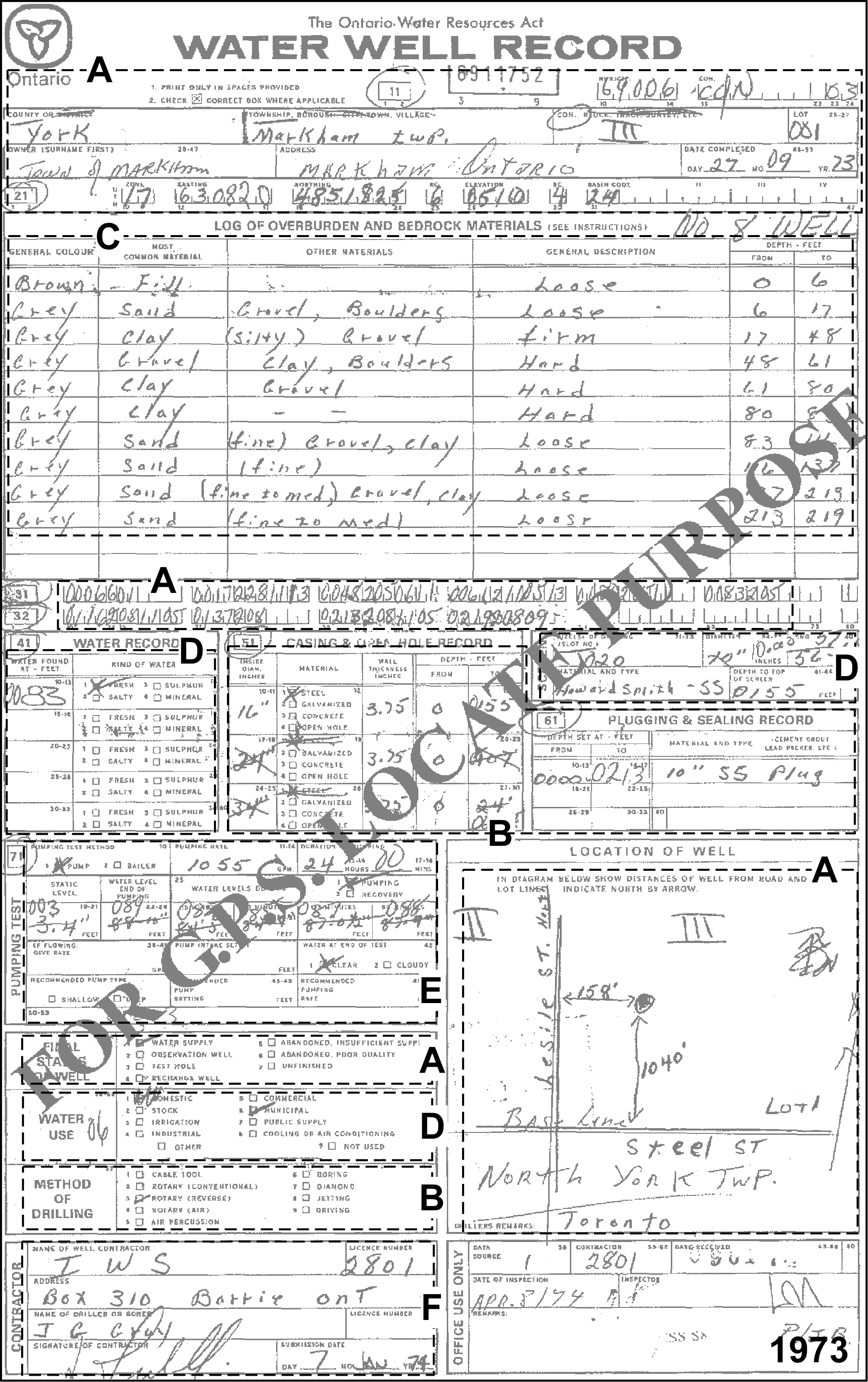 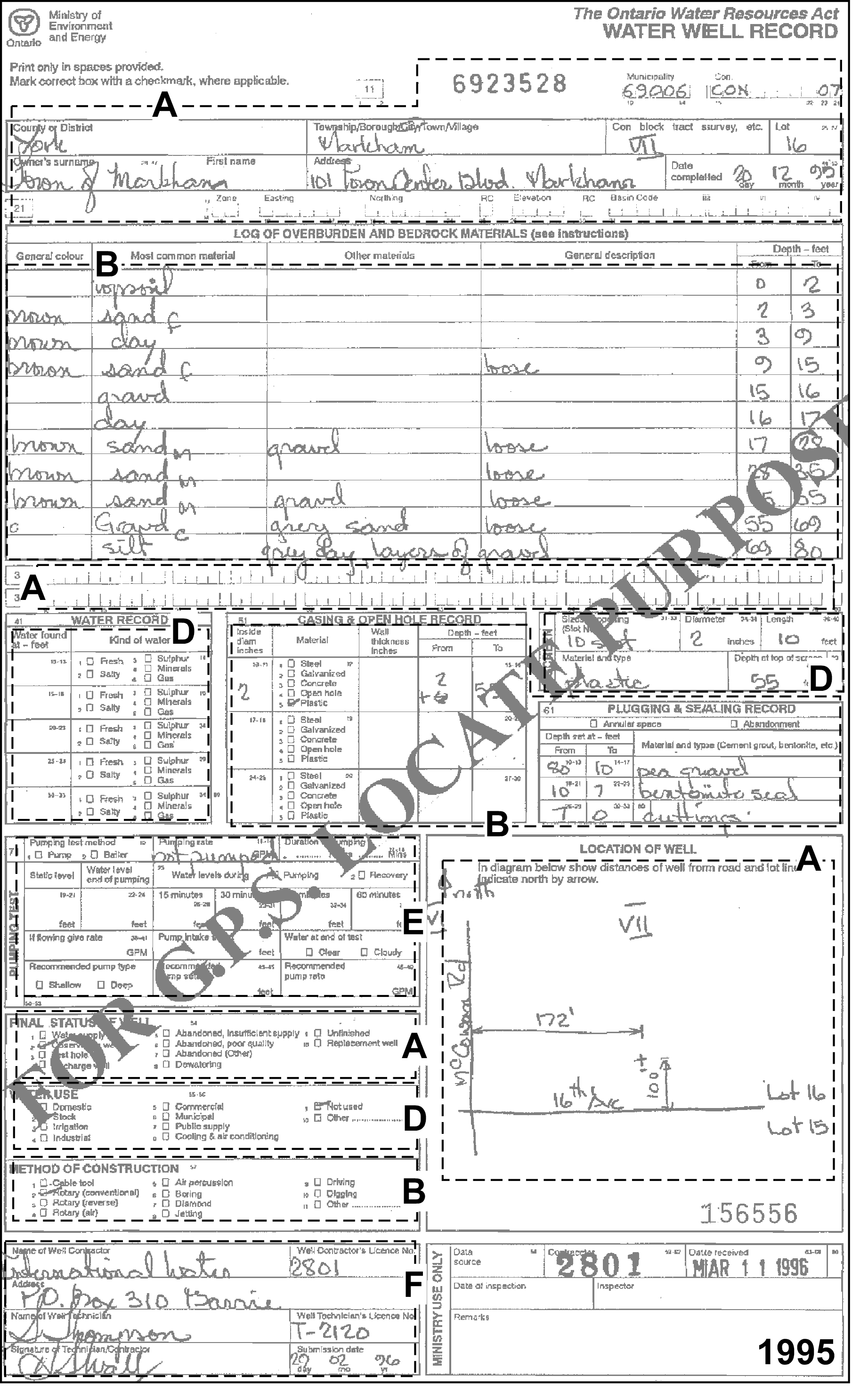