Appendix B - Soil Classification Systems and Translation of Geologic Layers

The difficulty with using the USCS is that soil classified as coarse-grained (i.e. more than 50% retained on a 200 mesh sieve) may still contain considerable clay and may both look like a clay-rich soil and also behave as a plastic or cohesive soil. Plasticity refers to the ability of a material to be deformed rapidly without cracking or crumbling and then to maintain that deformed state after the deforming force is released (e.g. molding clay into a shape). For this reason, describing the soil according to the USCS is quite difficult to do accurately based on field observations alone. It is more appropriate where laboratory testing of grain size (sieves and hydrometers) and physical properties (plastic and liquid limits) is completed. This is not the case for most of the borehole logs that are likely to be encountered in the ORMGP.

As outlined in Table B.1.1, the USCS has a two-letter capitalized group of symbol designations (GW, GP, etc.) that is not used in other systems. Recognizing these symbols is important in identifying that the USCS system is being used and therefore translating the descriptions appropriately. Be aware that there is a sedimentological lithofacies classification system, which is described below, that uses two letters symbols as well; that system, however, only has the first letter capitalized. 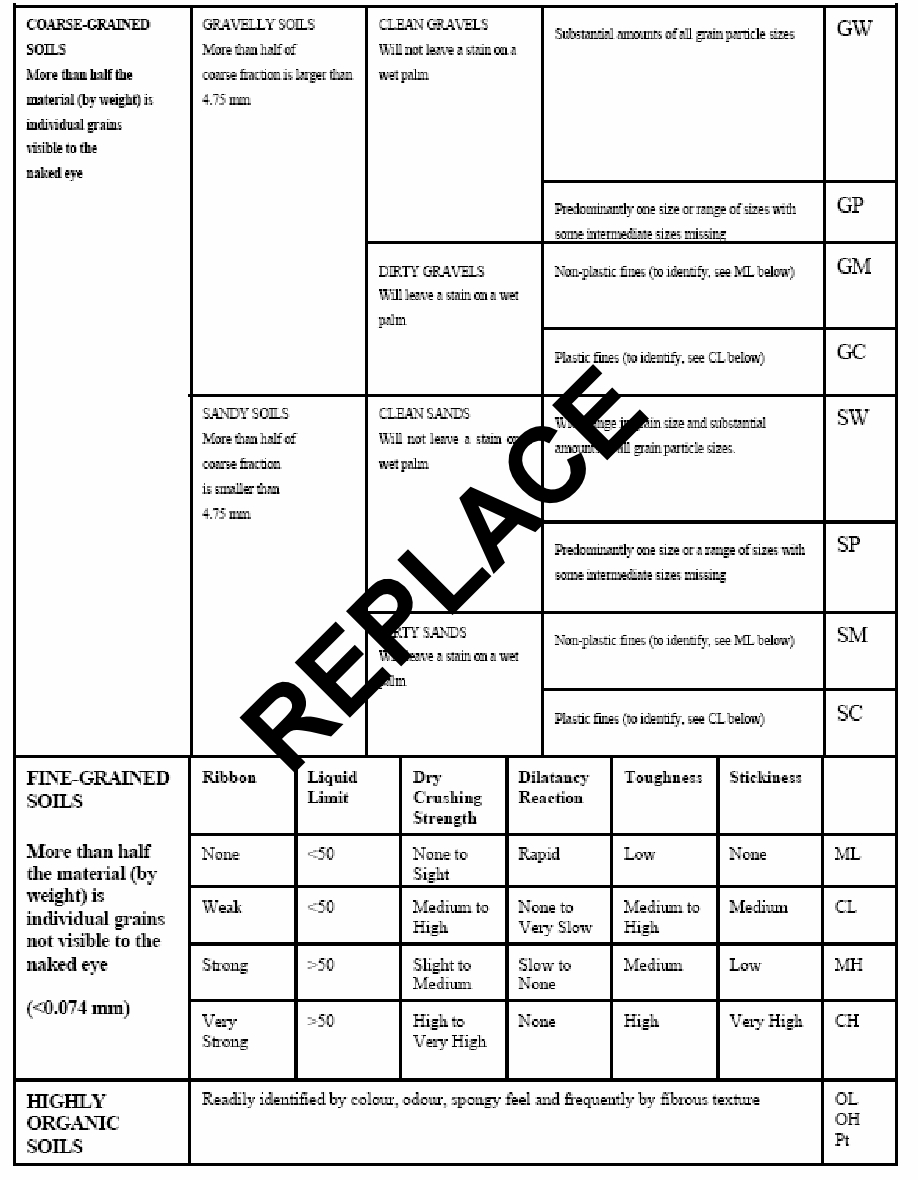 Translating the USCS into Material Codes

If the USCS system is used in a borehole log to be translated into our database, the following key points should be considered:

Hydrogeologists in southern Ontario often prepare borehole logs based on field observations alone or with a limited number of grain size analysis. As a result, they often use a practical soil classification system that has been previously been described by Golder Associates (Golder) as the Golder Associates Classification System (GACS) (GAL, 1992), although other consultants undoubtedly use their own variation.

The first step in the GACS is to determine, on the basis of performance, whether the soil behaves as a plastic (cohesive) or a non-plastic (cohesionless) material. This can be accomplished in the field by varying tests, such as determining if a thread of the soil can be rolled with varying moisture content. If the soil behaves plastically, then it is described as a clay (either a clay, silty clay or clayey silt). If the soil behaves as a non-plastic material, it is then described according to the USCS for coarse-grained materials. This distinction is made from the USCS because a soil can start to behave as a plastic soil at less than 10% volume clay content but it would be difficult, based on field observations alone to determine whether the soil had 10% clay content or 60% clay content. Furthermore, plastic soils, regardless of clay content, are more likely to comprise aquitards than aquifers. Cohesionless soils do not exhibit plastic behavior at any water content. By contrast, cohesive soils exhibit plastic behavior as defined by the Atterberg limit test over a reasonably wide range of molding water contents. Plasticity is controlled by the presence and type of clay mineral within the soil.

Note that the modifiers are not directly applicable to clay mineral content because as little as 8 - 12% clay mineral by weight can make a soil behave as a plastic material. Minor amounts of clay in an essentially cohesionless soil should be indicated as ‘trace clay’

It is important to realize that the USCS does not enable the identification of tills or diamicts. In the GACS or similar system, sometime tills are identified in brackets after the main constituents (e.g. CLAYEY SILT (till), trace gravel). By using the word till or diamict, the person who logged the soil implies that the soil is massive with a poorly sorted mixture of fine and coarse-grained constituents. Use of the word till implies an interpretation of depositional setting (usually subglacial), whereas the use of the word diamict implies no associated interpreted depositional setting. It is also important to realize that, in Southern Ontario, many tills can have the same constituents as glaciolacustrine deposits so that if the soil has been interpreted as a till, it is imperative that this interpretation be translated into our database.

Identification of tills in one of the key challenges of our work as recognizing tills greatly aides establishing the stratigraphy. Therefore, borehole logs in which the tills have been correctly identified are invaluable. Because of this, if a log identifies a soil as a till, till should always be placed in the Material 3 column. This may result in having to leave out one of the minor soil constituents but it is more important to have till in the database rather than a minor soil constituent. For example, clay silt (TILL), trace gravel, might be either translated to CLAY (material 1), SILT (material 2), TILL (material 3). Alternatively, gravel could be placed in the Material 2 column and silt could be left out.

Tills / diamicts are considered in sedimentological classifications systems, described below.

A lithofacies classification system was developed by fluvial sedimentologists. We may occasionally see a borehole log using this system - typically from someone involved in academic research / GSC etc.

The original lithofacies system (Miall, 1978) employed 20 standard lithofacies types, each had assigned code letters. The codes are in two parts: the first is a capital letter G, S or F, representing gravel, sand or fines, respectively. The second part of the code consists of one or two letters to describe the most characteristic internal feature (structure) (not necessarily constituent). A brief overview of these lithofacies codes is provided in Table B.4.1. 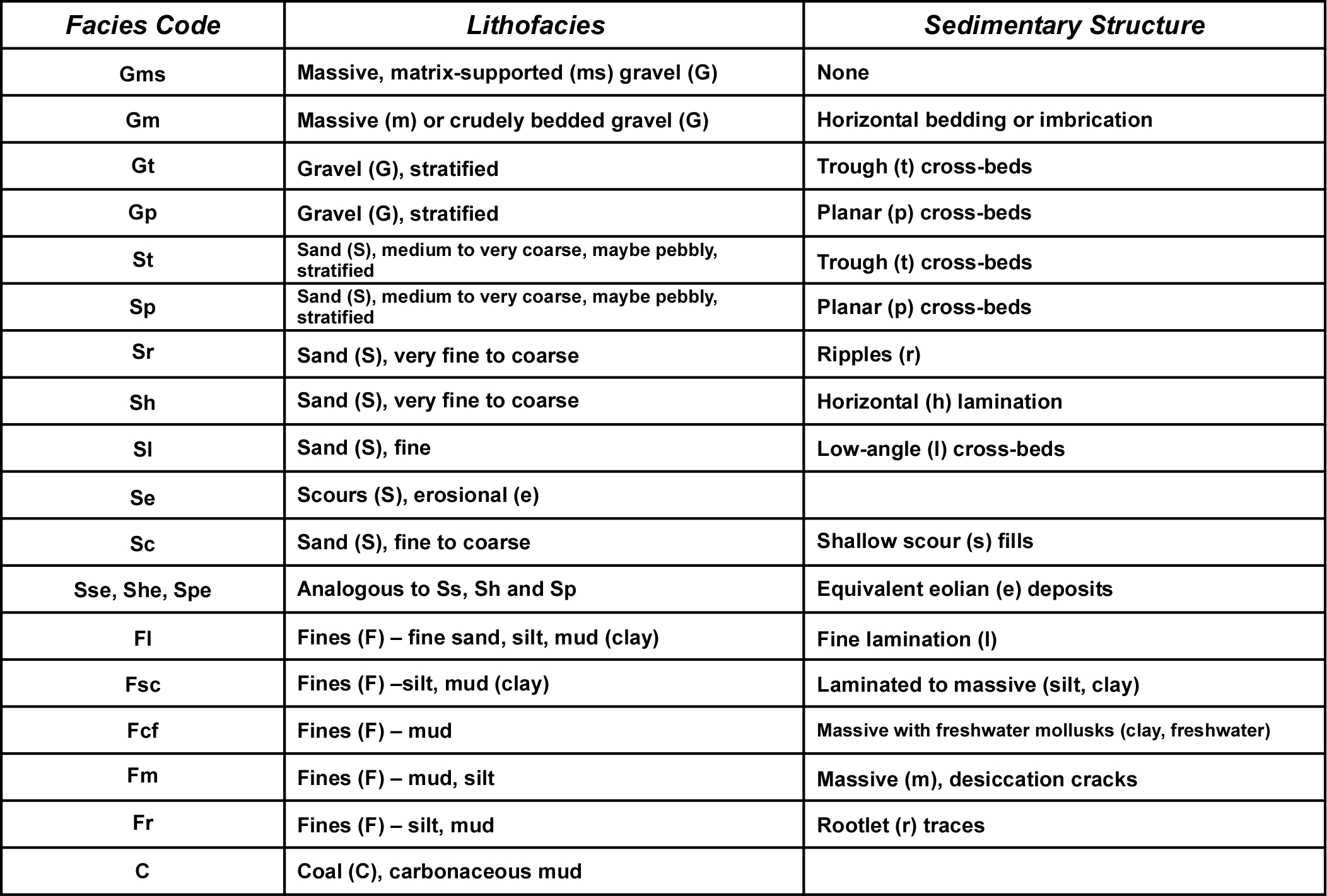 If this coding system is encountered

The lithofacies classification system discussed above was adapted and modified by Quaternary geologists to enable description and interpretation of Quaternary (i.e. glacial) facies and depositional environments (Eyles et al, 1983). The classification system was modified into a four part lithofacies code. The code designator D was introduced for diamict. In Southern Ontario the overburden deposits are Quaternary deposits, therefore, this is the system we are more likely to encounter in a local academic/scientific borehole log. This system is summarized in Table B.4.2. 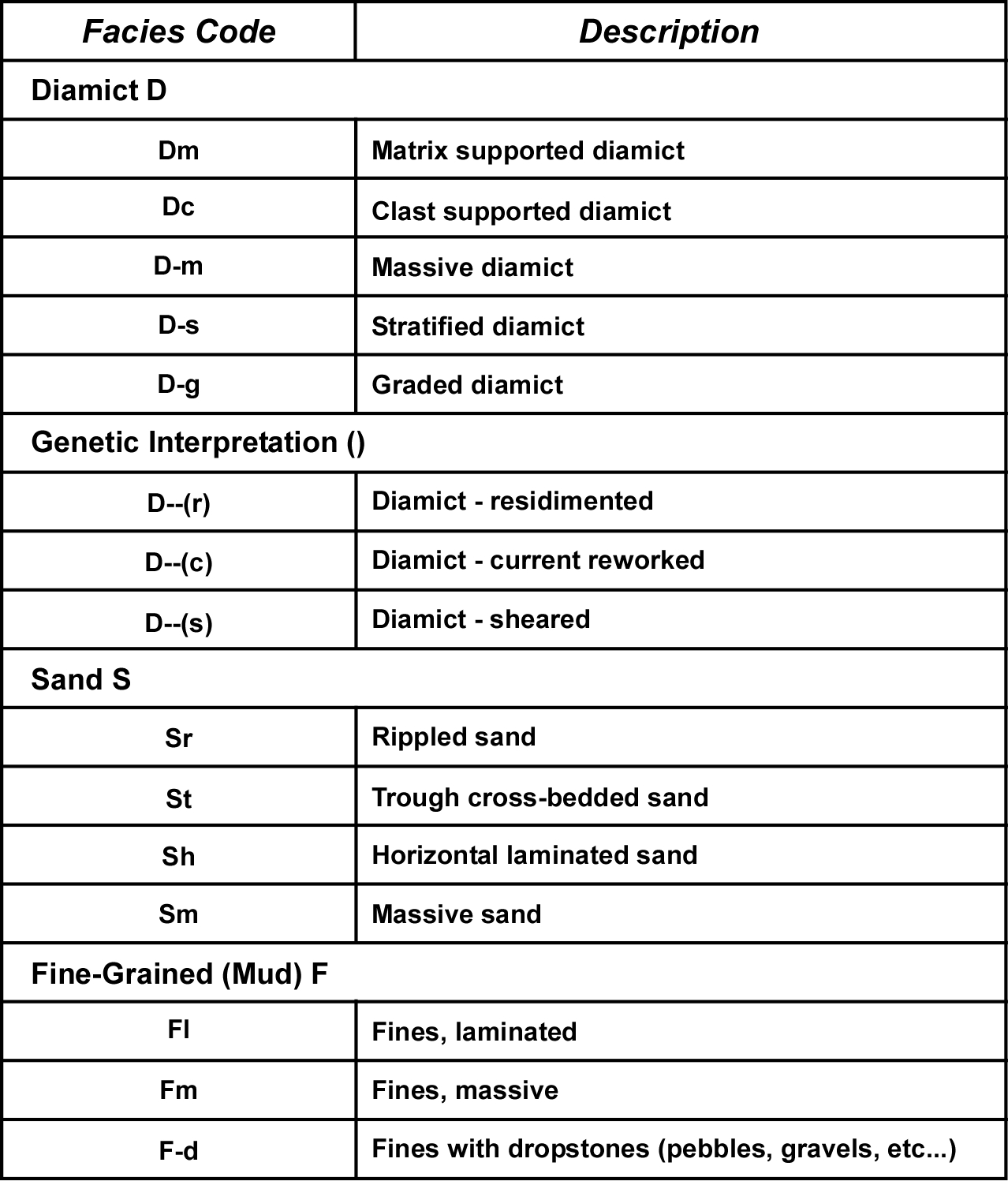 It should be noted that more than one secondary code can be used. A few examples of this are: Dmm - matrix-supported, massive, diamict; Dmg, matrix supported, graded etc.

If this coding system is encountered, the approach is similar to that used for the previous lithofacies classification system