As a first example, we will look for all wells that have been associated with Nobleton. 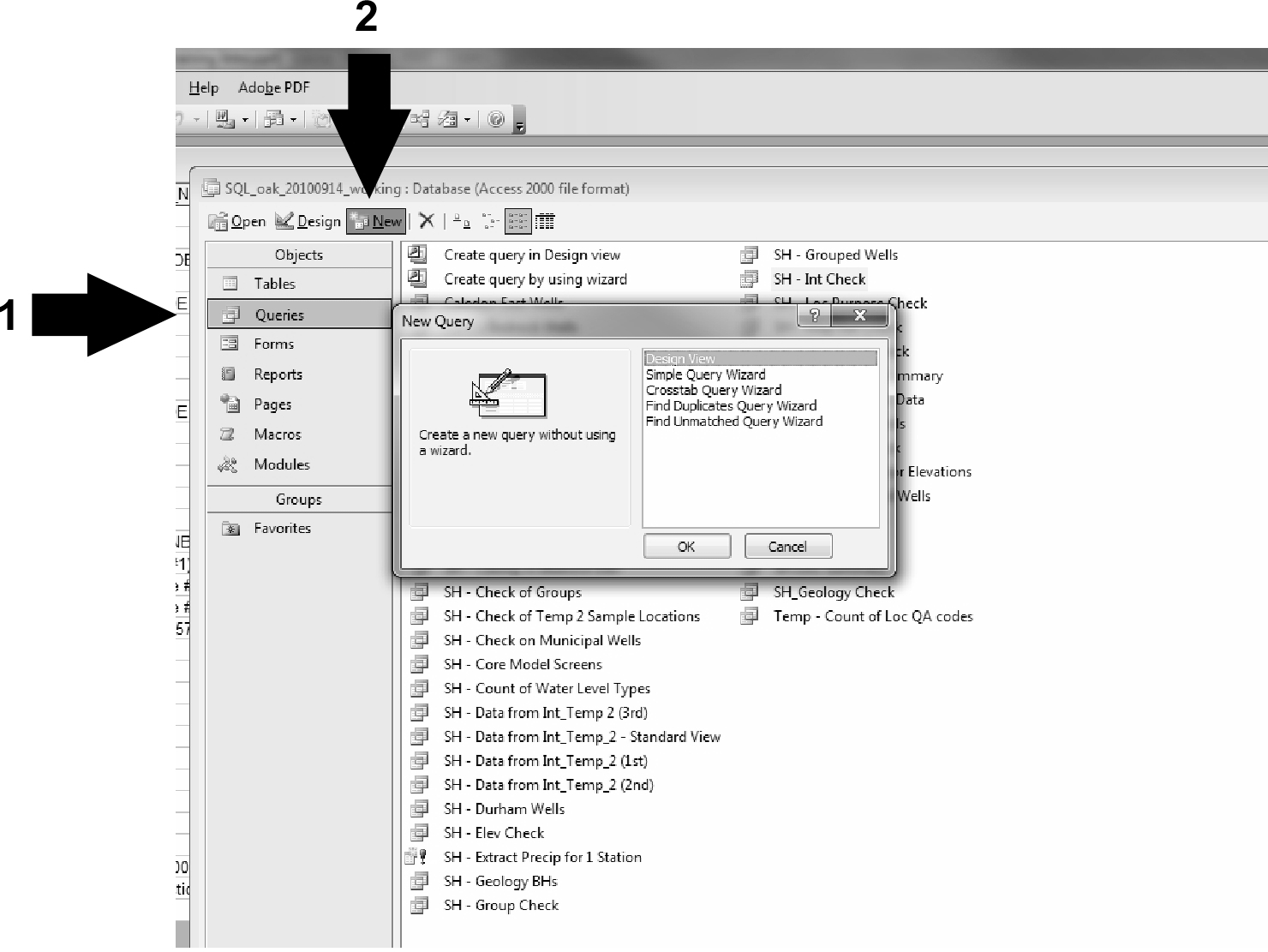 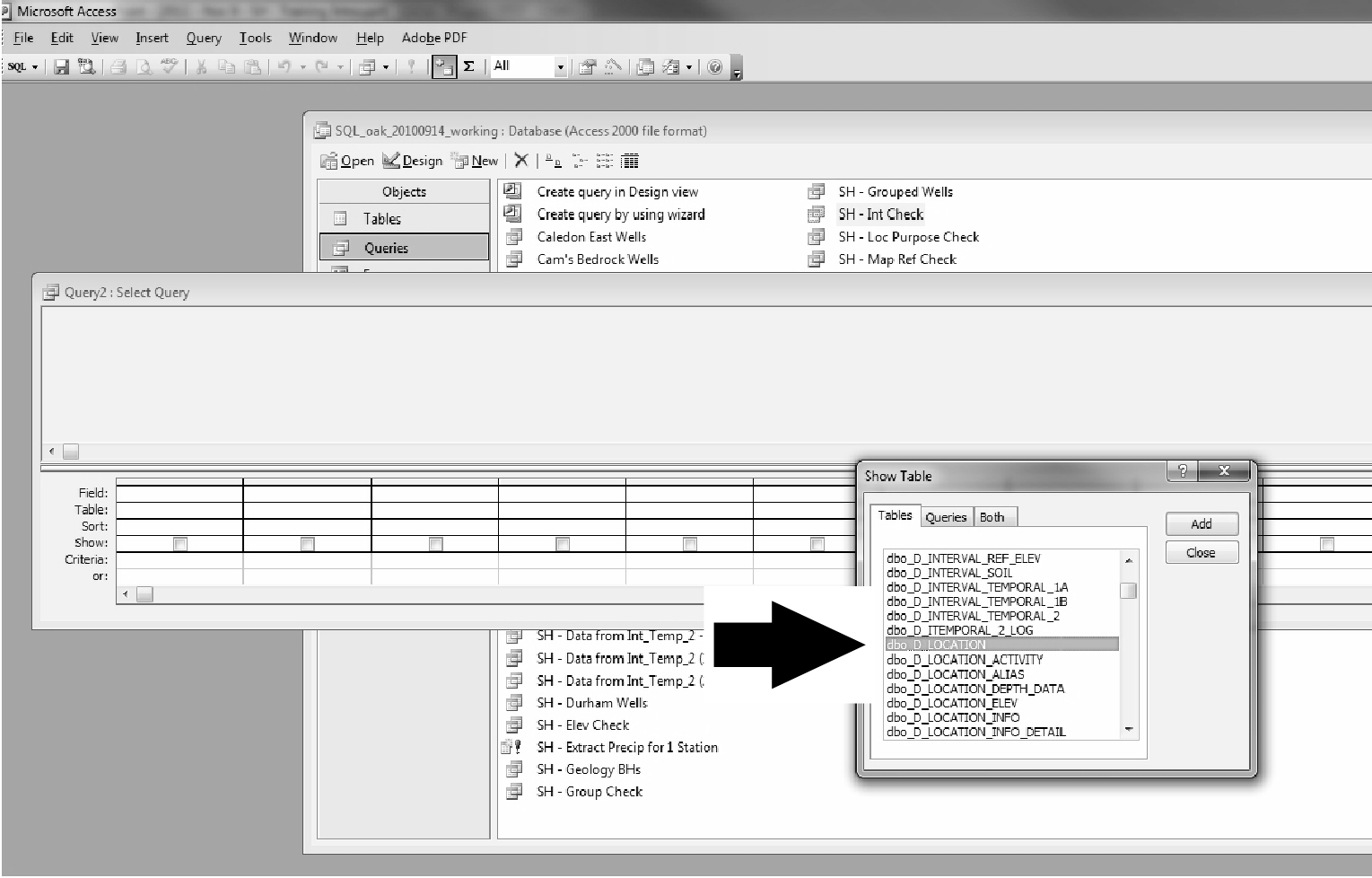 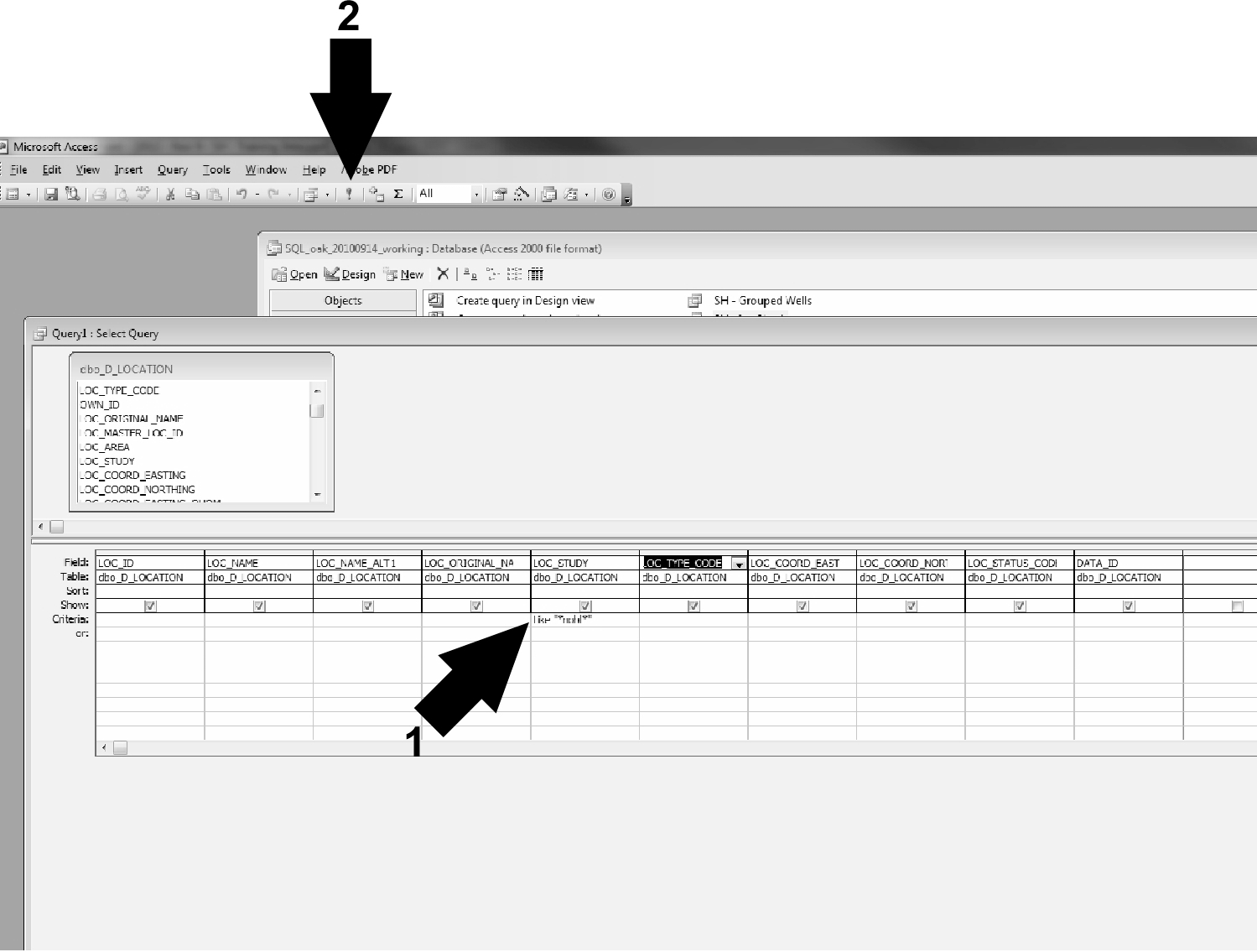 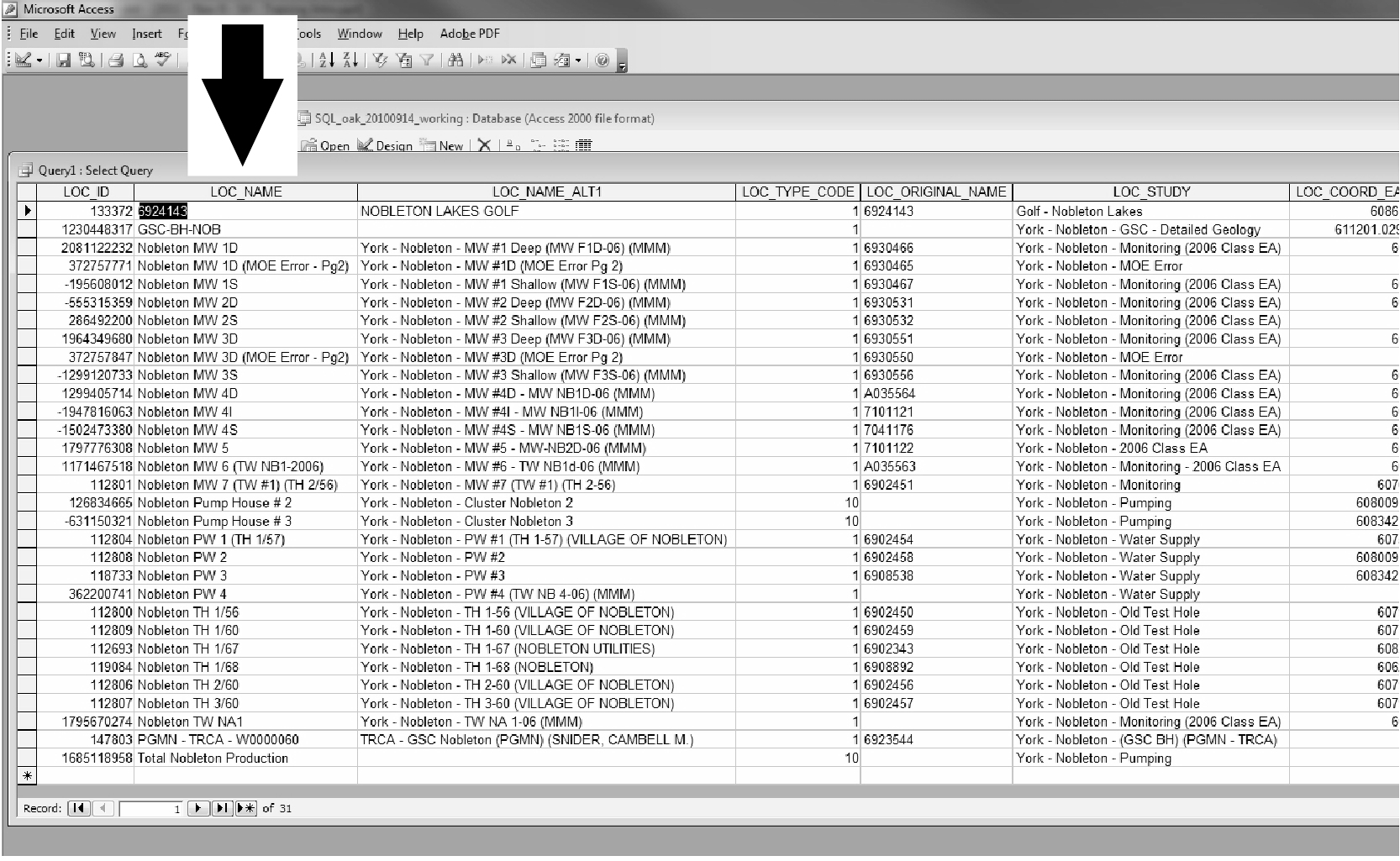 This example mirrors the previous (1a) with screenshots from Microsoft Access 2010.

Select the ‘Queries’ option under ‘Objects’ and then select ‘New’ 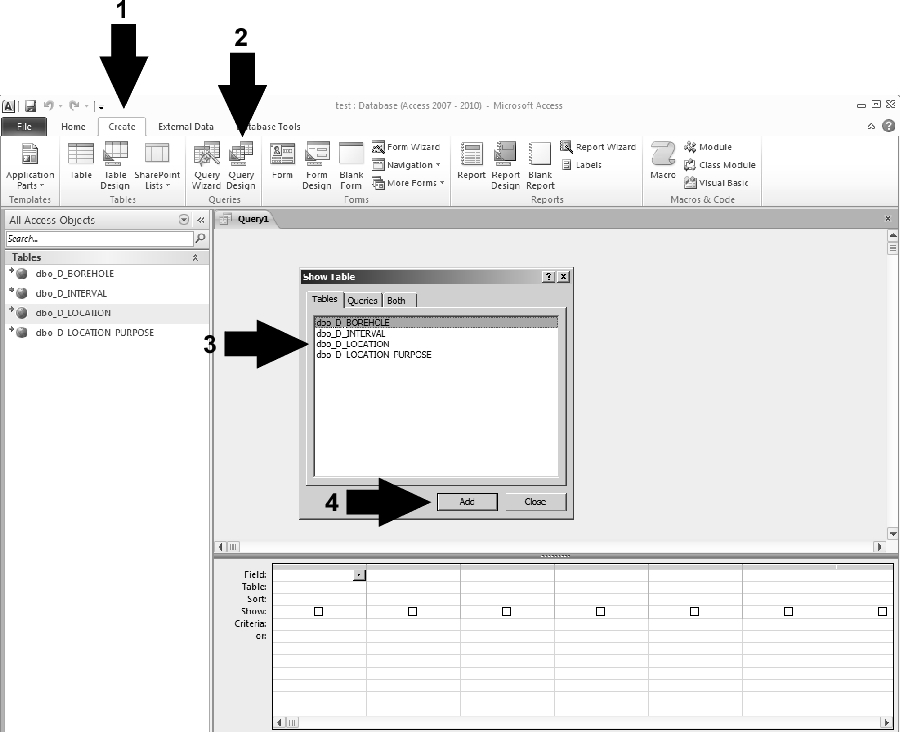 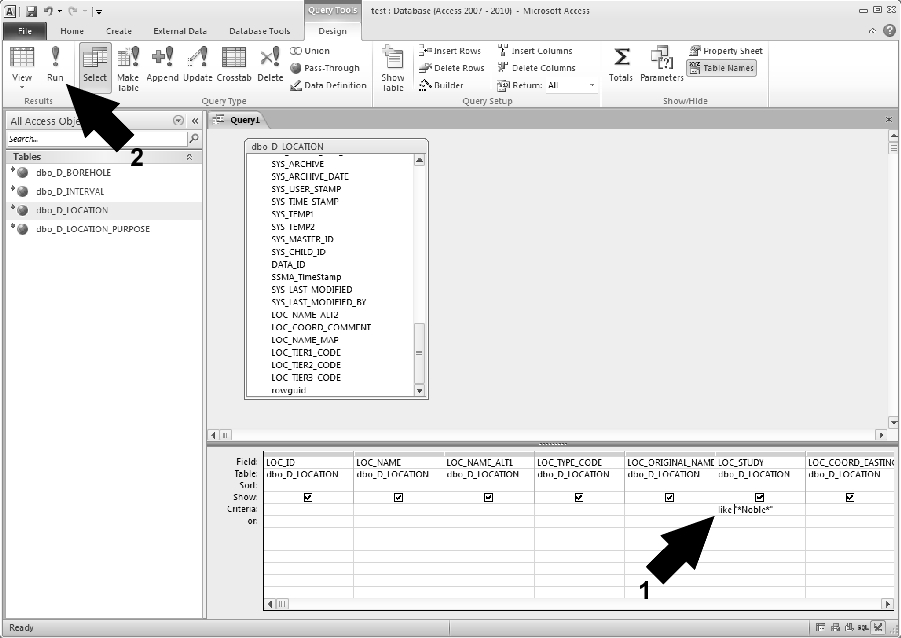 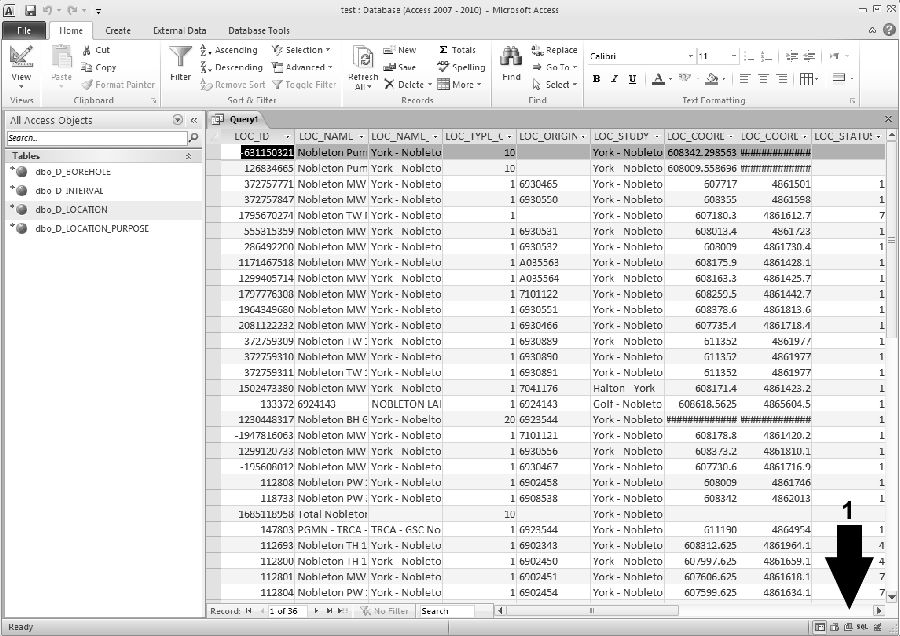 A similar design procedure can be accomplished in Microsoft SQL Management Studio through selection of the database (e.g. OAK_20120615_CLOCA) then selecting the ‘New Query’ button. Once the blank query is available (make sure that the cursor is within the query window) select ‘Query - Design Query in Editor’. A similar series of options as described above in ‘Example 1b’ will be presented. Once the query is finished being built/edited, the user will be returned to the query window where it can then be run. While the Access version of the query remains as part of the users (Access) database, the query built in Management Studio must be saved as a separate file (with an ‘.sql’ extension). The latter defaults to working within the SQL language as opposed to the graphic representation found in Access.

An SQL command that accomplishes the task in ‘Example 1a’ would be of the form:

This would return the same result set found in ‘Example 1a’. There are a few differences between the two software packages related to formatting: the use of single quotes as opposed to double-quotes (after ‘like’); the use of percent signs (%) in place of stars (*) for designating wild-card characters. Also, the ‘[OAK_20160831].dbo.’ is unnecessary if the user is only dealing with one database.

A similar SQL command can be viewed within Access if the user selects ‘View - SQL View’ while in the ‘Design’ mode of the query (instead of in the results).

In this case, we’ll use a ‘View’ within the database from which we’ll extract certain pieces of information. View’s in Microsoft SQL Server are used to hide the complexity of linked/joined tables from the user and to provide easier access to information through (for example) the minimization of searching/linking through tables.

Make sure the the view V_GEN_BOREHOLE_BEDROCK has been linked into Access (following the instructions of Section 3.1.1 and ‘Example 1a/1b’, above). Note that Access does not distinguish between tables and views, treating the latter as a table.

The complexity of ‘joining’ the tables together based on their location is hidden within the view itself. The definition of ‘bedrock’ itself is present (and accessed on-the- fly) from another table - R_GEOL_MAT1_CODE - avoiding the classification of each layer in a borehole as bedrock (or not). 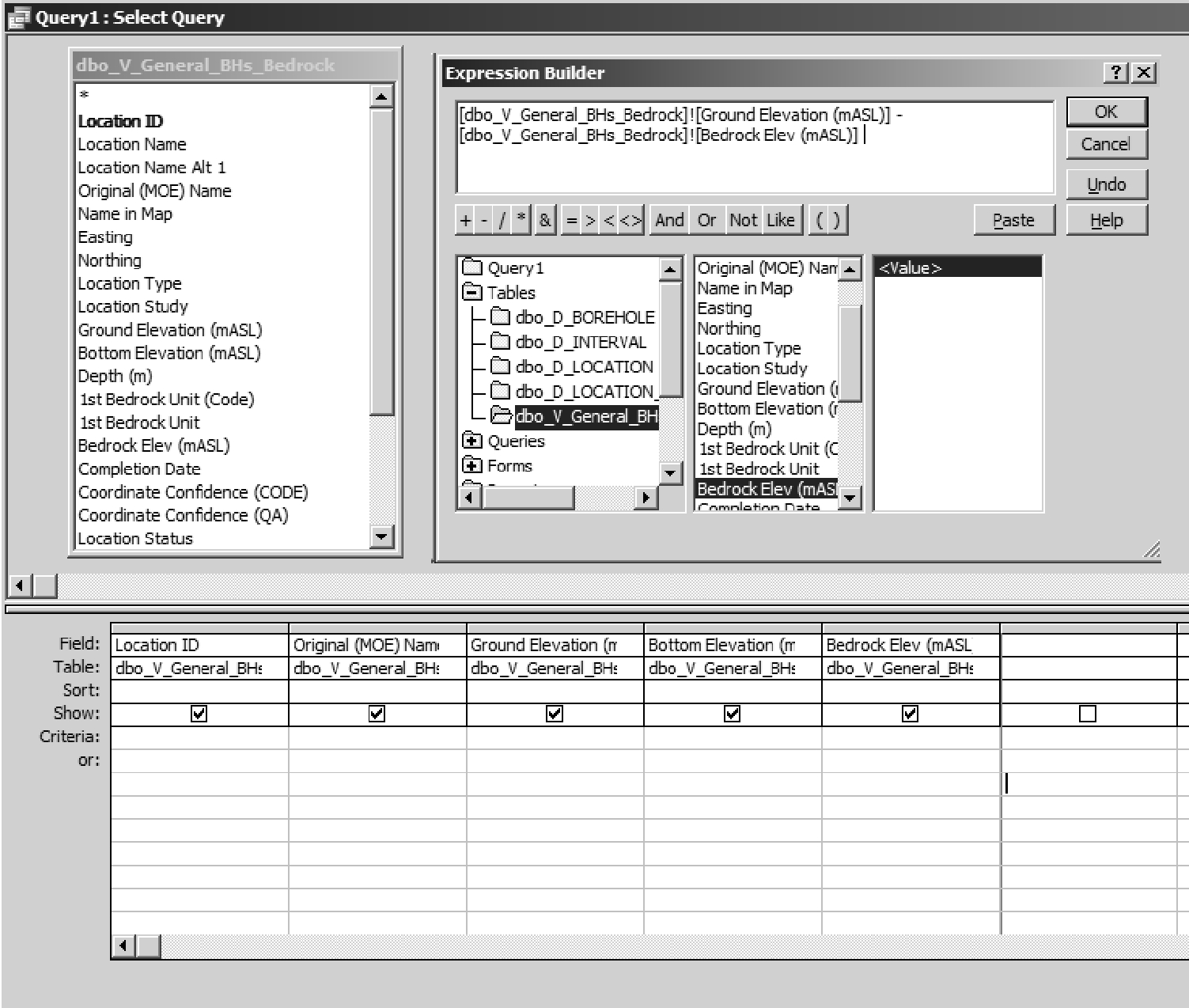 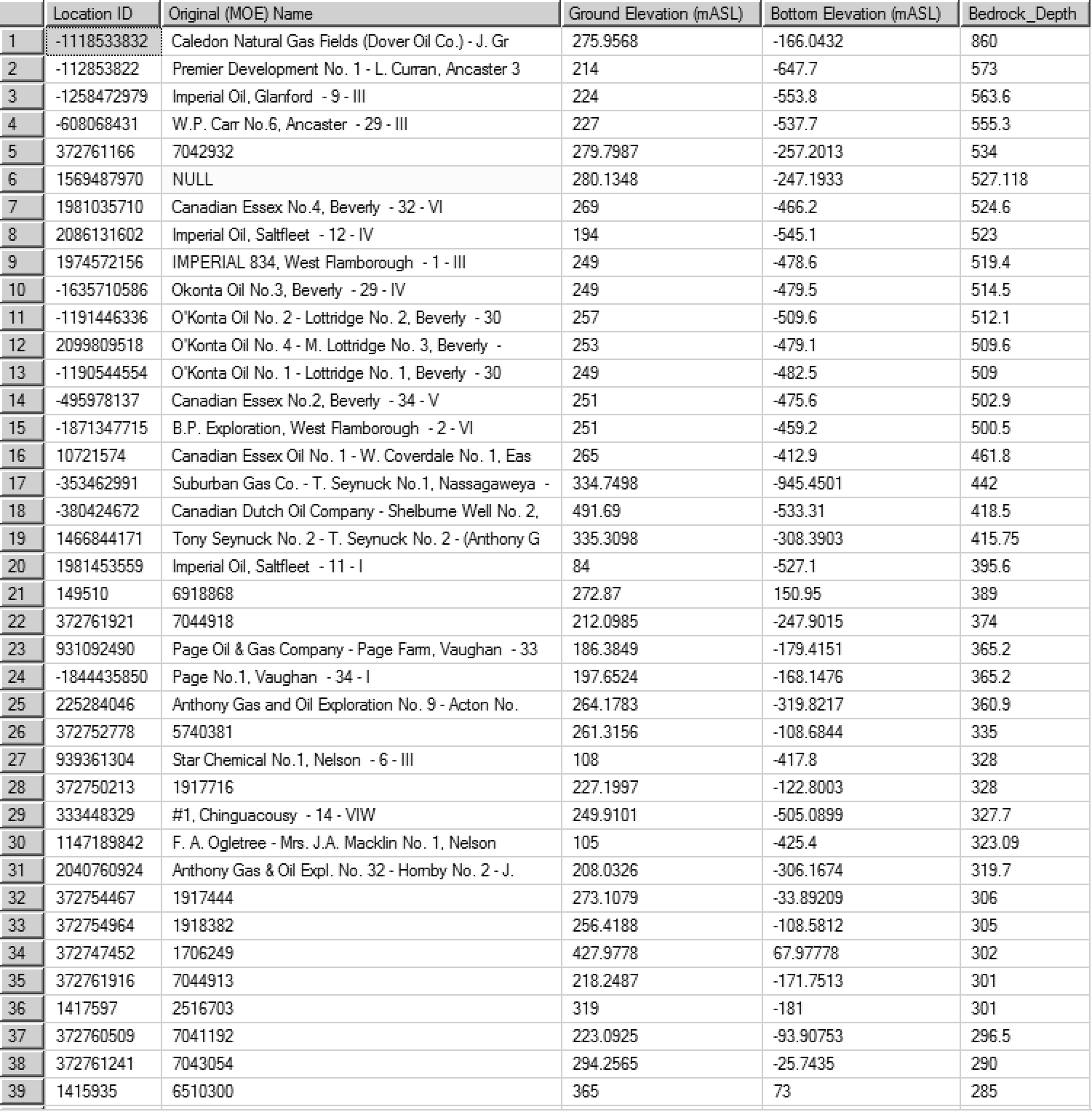 To locate all municipal pumping wells, the query would draw from the D_LOCATION table and the D_LOCATION_PURPOSE table, using criteria of 10 (water supply) for the primary water use, and a criteria of 22 (municipal) for the secondary water use. We also need to extract only boreholes (and not anything else) - this corresponds to a LOC_TYPE_CODE of ‘1’. Note that each water use has an end date, allowing chronological tracking of changing well uses with time. The SQL code would then be:

Note here that we’re using ‘aliases’ of table names to shorten the SQL code required (e.g. DLP for D_LOCATION_PURPOSE). Refer to Appendix A for a description of the application of SQL with regards to the ORMGP database.

The equivalent query, created in ‘Access - Design View’, would be similar to 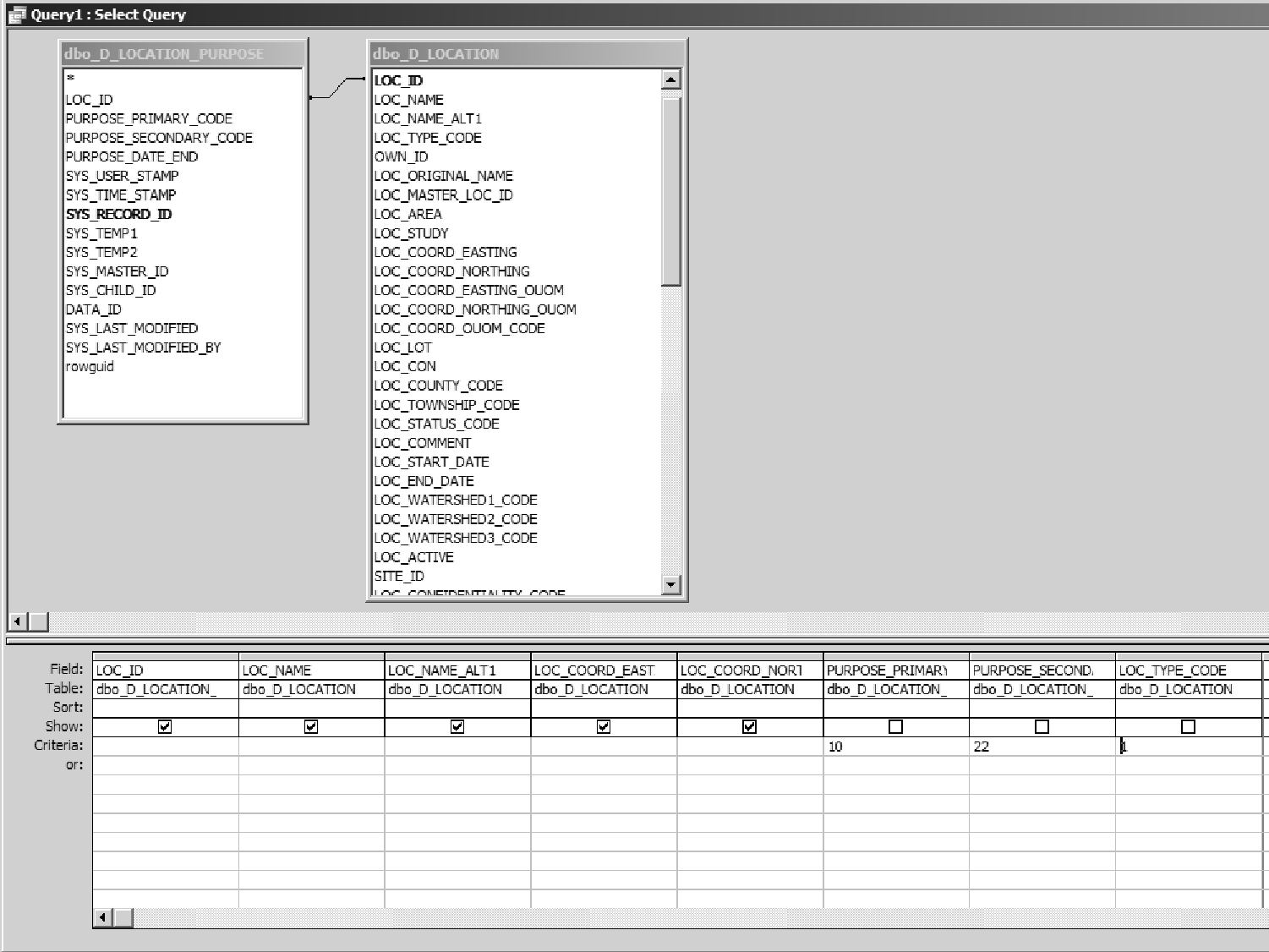 It has been the case that datasets have been stored across multiple files (typically Access or Excel files) with information being copied-pasted as required for creating a particular one-off dataset. It is more advantageous to centralize this information (and thereby reducing possible errors during the transferral process) and access it as necessary. This allows information updates to be rolled into analysis without lengthy modification/reformatting procedures. When the user revisits the spreadsheet at some point in the future, a refresh of the dataset will cause any new information to be included automatically (refer also the comments at the end of this example).

One primary example of this is the plotting, using Excel, of water level data. This example assumes that the user has already reviewed Section 3.1.1 (General Database Access) and created the necessary files/odbc-links enabling Excel to communicate with the database. (Note that the reference version of Excel is 2003. This example should apply to more recent versions with only slightly different paths for accessing the Excel functions.) 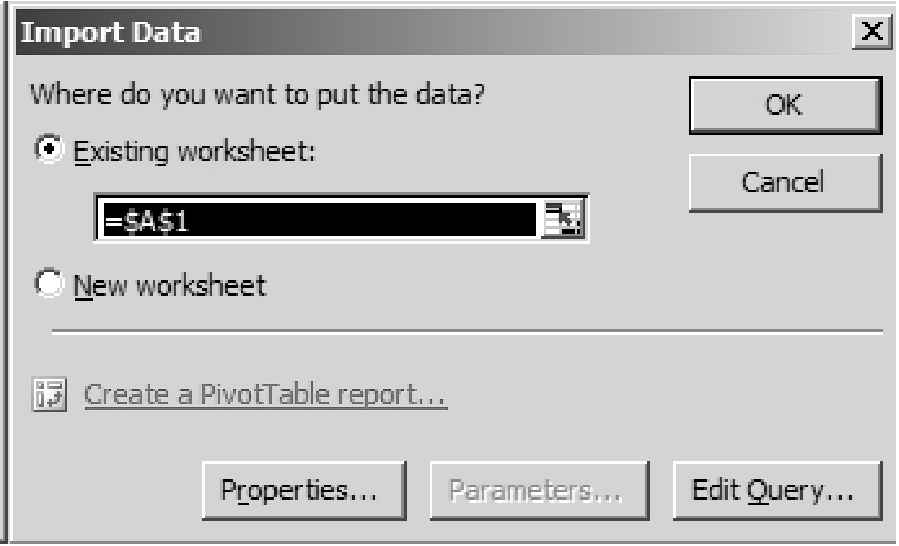 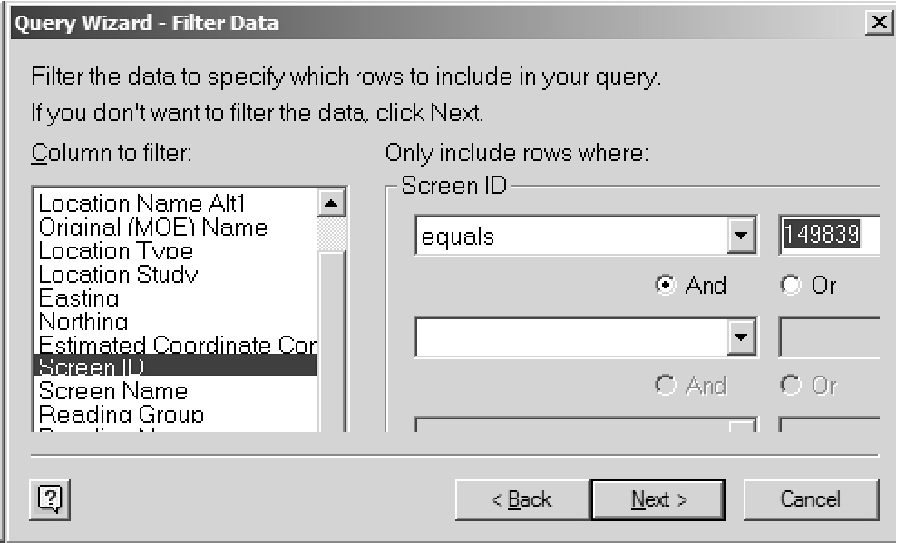 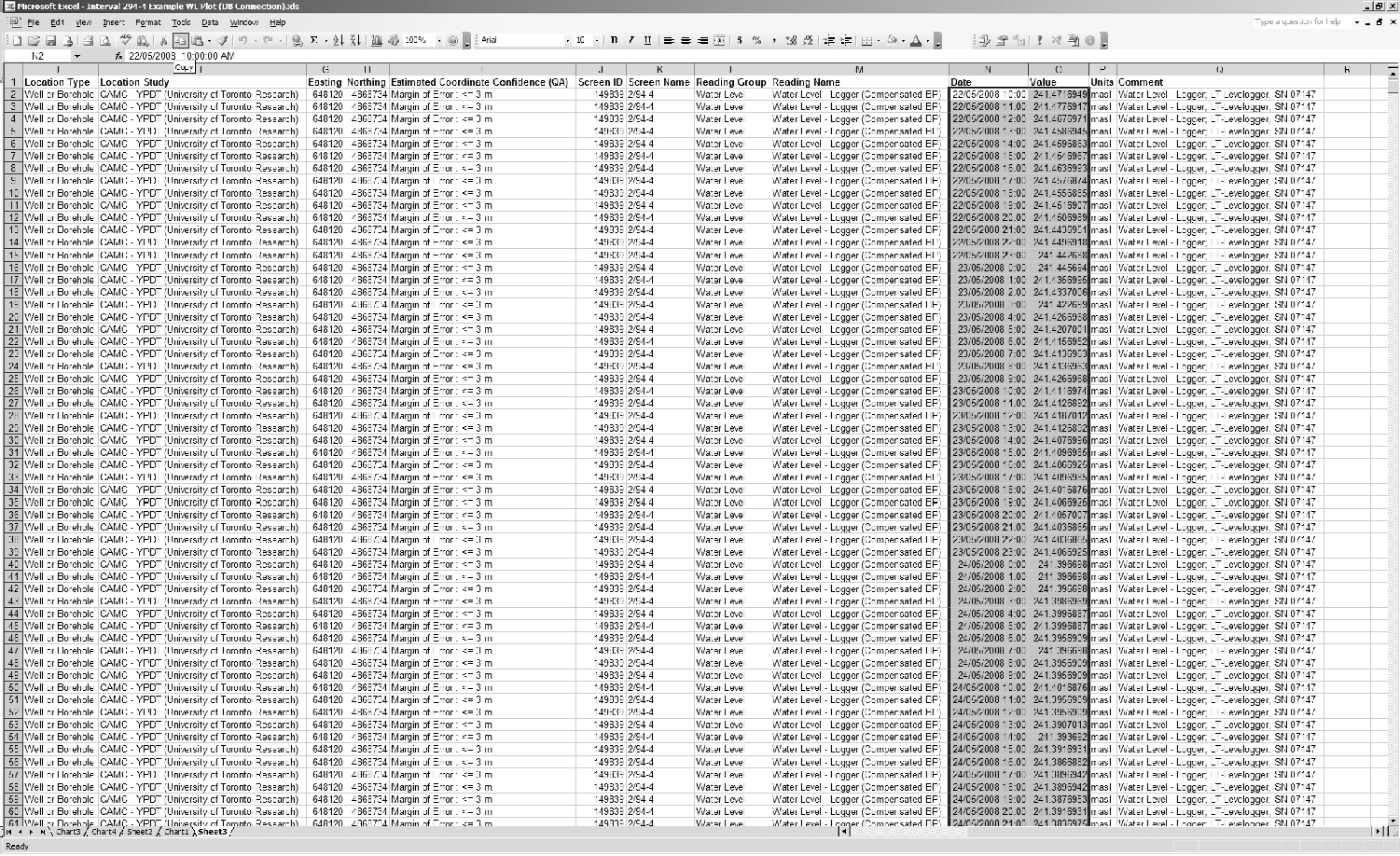 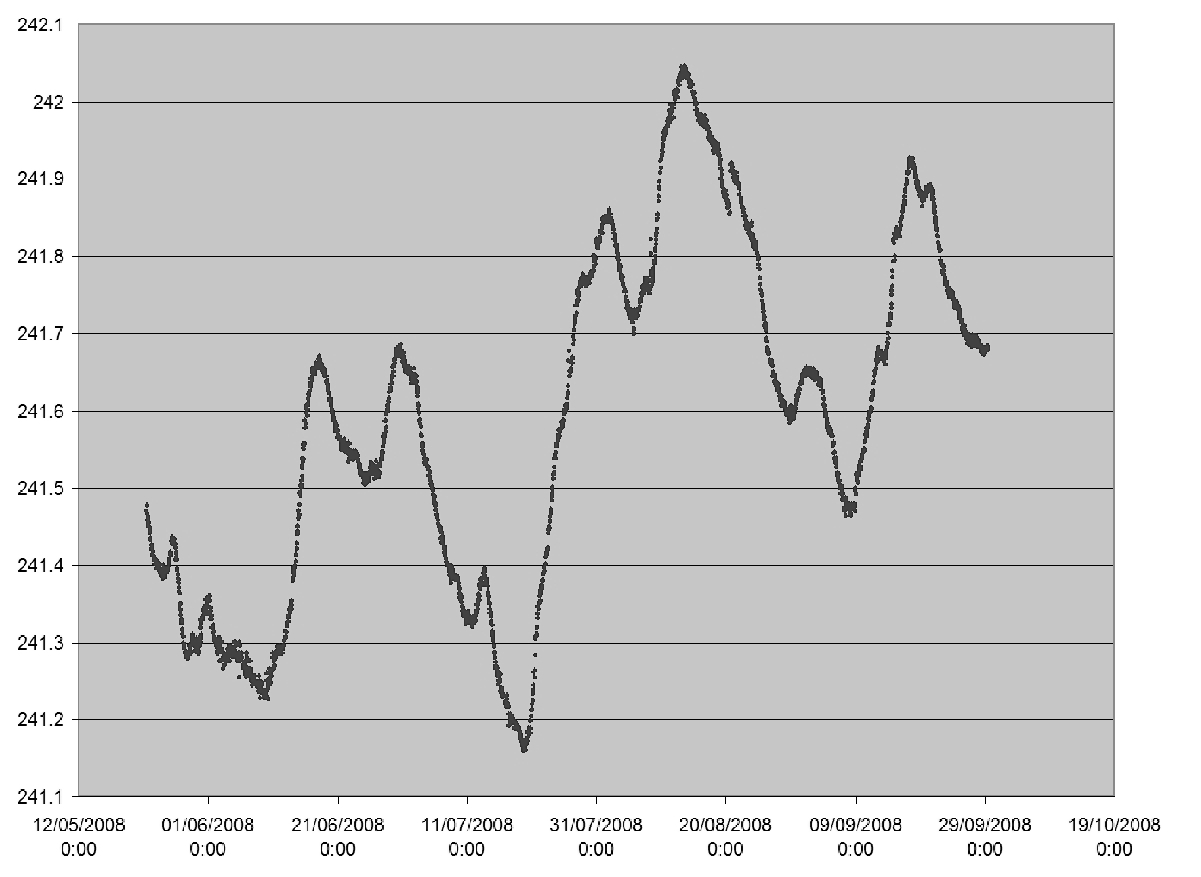 A few comments regarding this process

The method for plotting water levels in the updated version of Microsoft Excel is, basically, equivalent to that described in Example 4a (above). Access to an external data source is enabled through the ‘Data - Other Sources’ tab. 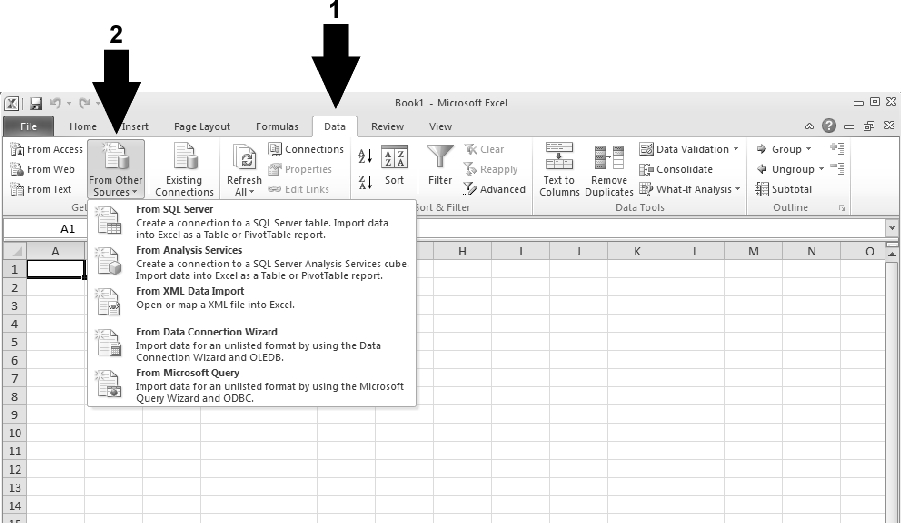 Selecting ‘From Microsoft Query’ allows the user to select the (previously enabled) database source (through, for example, the ‘ODBC Administrator’ program).

Here the database chosen would be ‘MDM6500_OAK’; selecting ‘OK’ would take the user to the ‘Query Designer’ window (outlined previously).

Selecting, instead, the ‘From SQL Server’ (i.e. a direct connection) allows the user to specify the SQL Server (name) holding the ORMGP partner database. 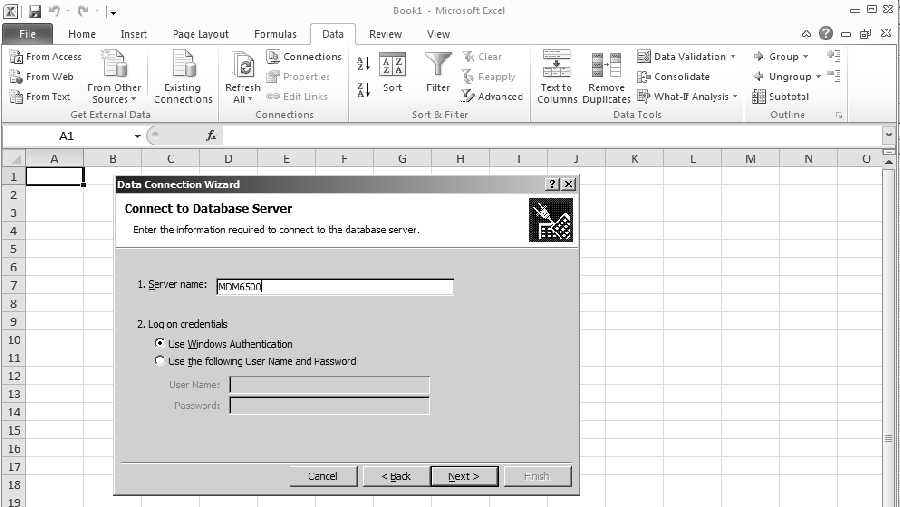 And then select the database and table to import into Excel. 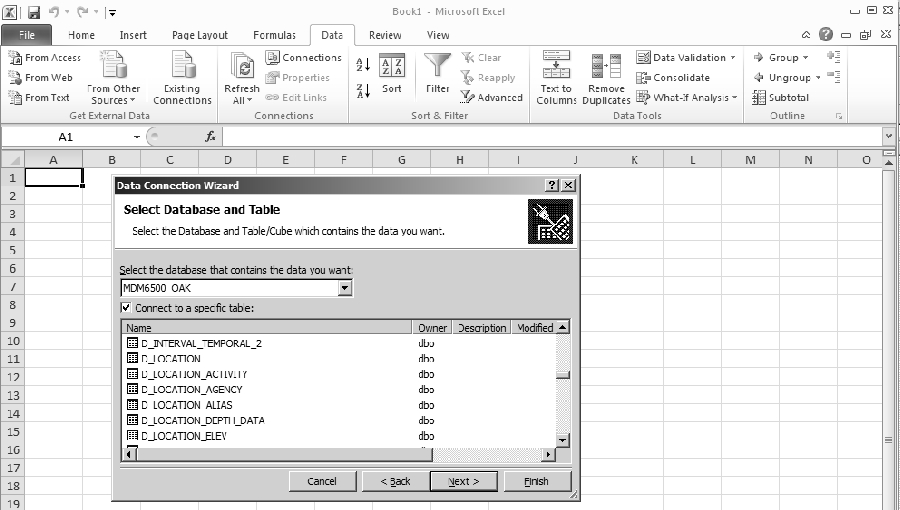 However, note that many of the tables present in the database will have an exceedingly large number of rows (and, potentially, columns) and the entire table would be imported. Using an alternate method of connecting to the database, allowing the reduction of the number of rows returned through Excel’s ‘Query Designer’ is recommended.

Flow gauges, as they would record what would be considered as ‘temporal’ data, are assigned a particular type in the R_INT_TYPE_CODE table (i.e. ‘Surface Water Flow Gauge’ has a value of ‘4’). As such, the D_INTERVAL table is the first place to start determining the location of flow gauges. The SQL command

would return all rows where an ‘interval’ is identified as a flow gauge. 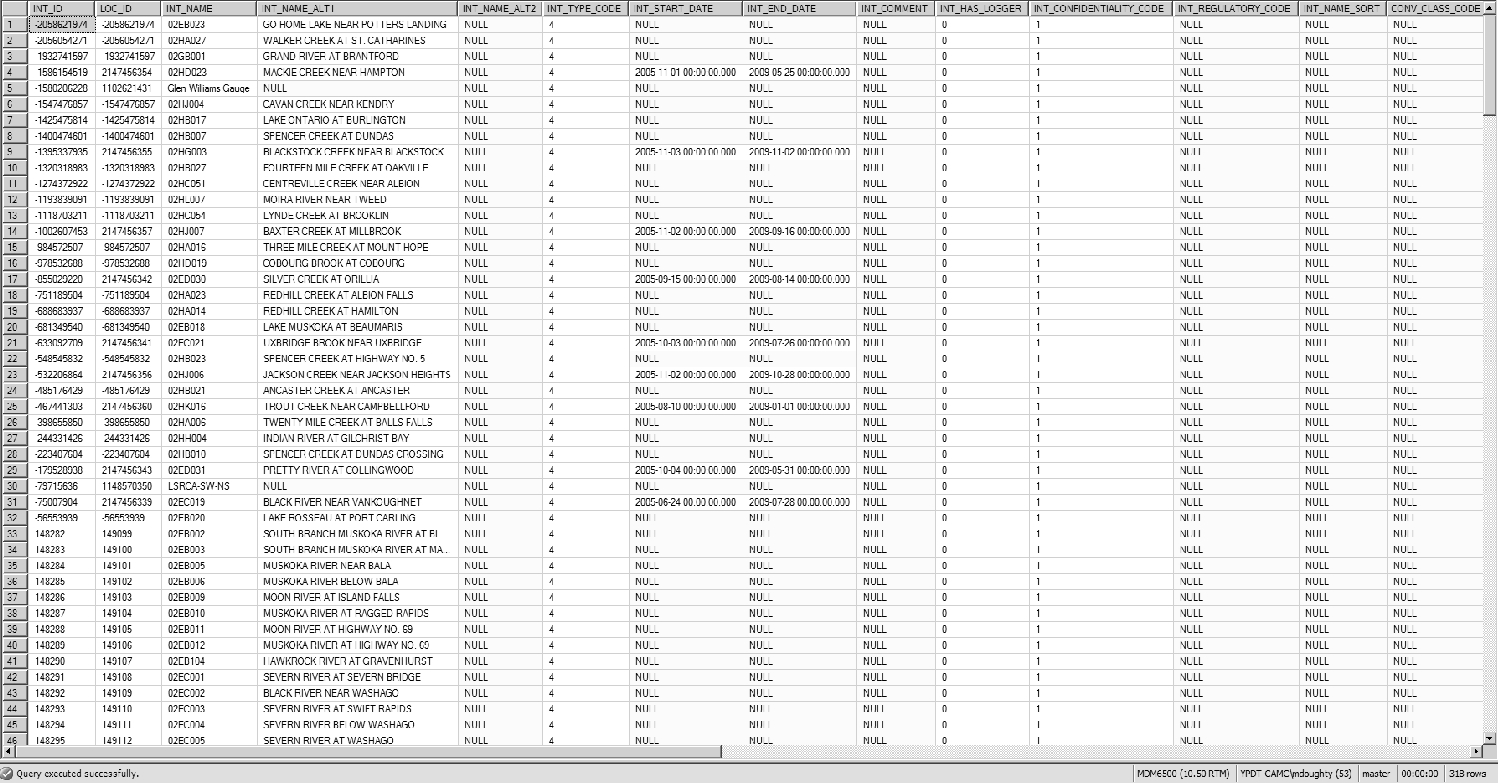 All columns (here, specified using ‘*’) would be returned. In reality, we only need the LOC_ID from this table in order to access the related information from the D_LOCATION table. We’ll now perform a ‘relational join’ between D_INTERVAL and D_LOCATION to extract the coordinates and names of the flow gauge stations.

Note that we’re using ‘aliases’ (with the AS keyword) to shorten the names of the D_LOCATION (i.e. dloc) and D_INTERVAL (i.e. dint) tables. This would then return the requisite information. 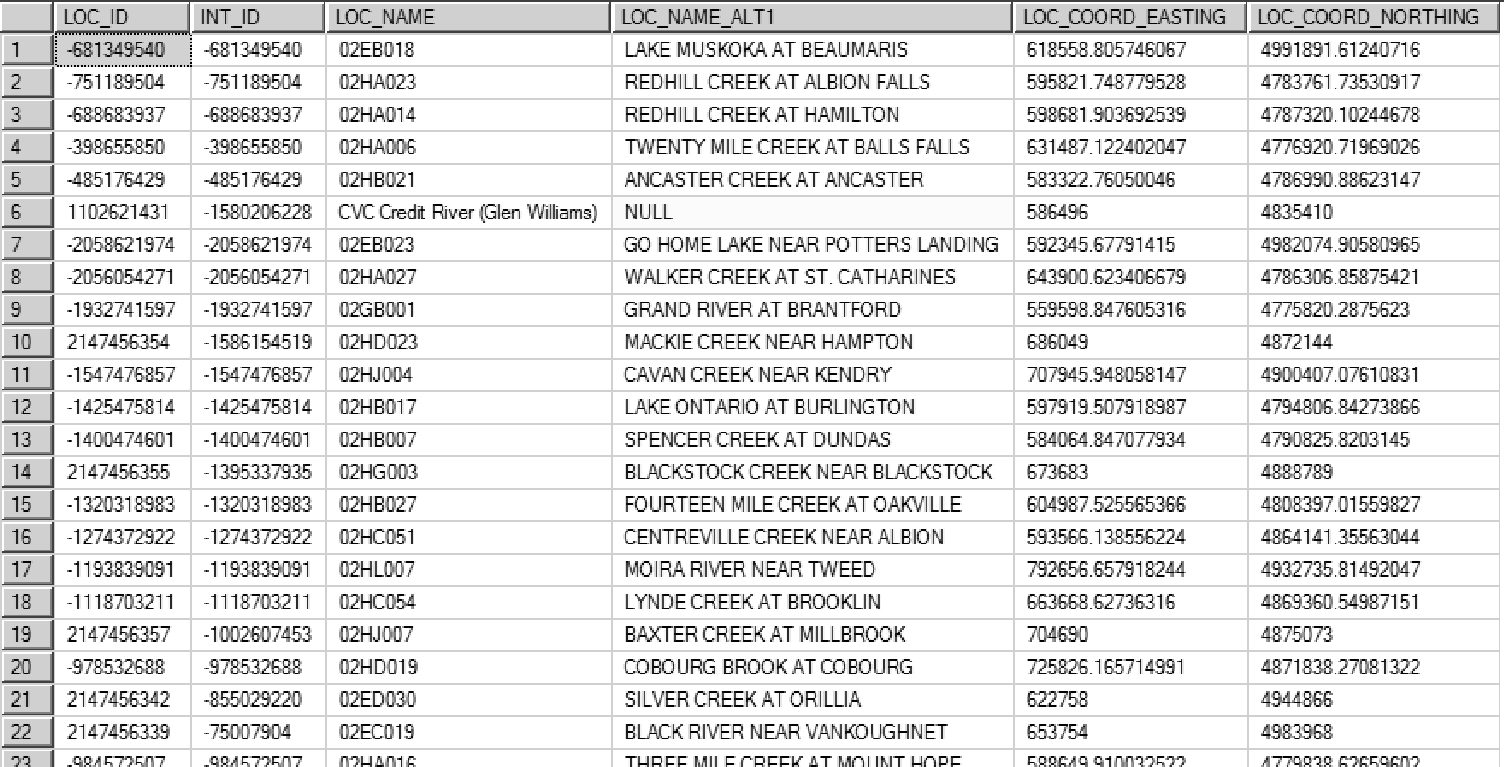 The equivalent query, created in ‘Access - Design View’, would be similar to 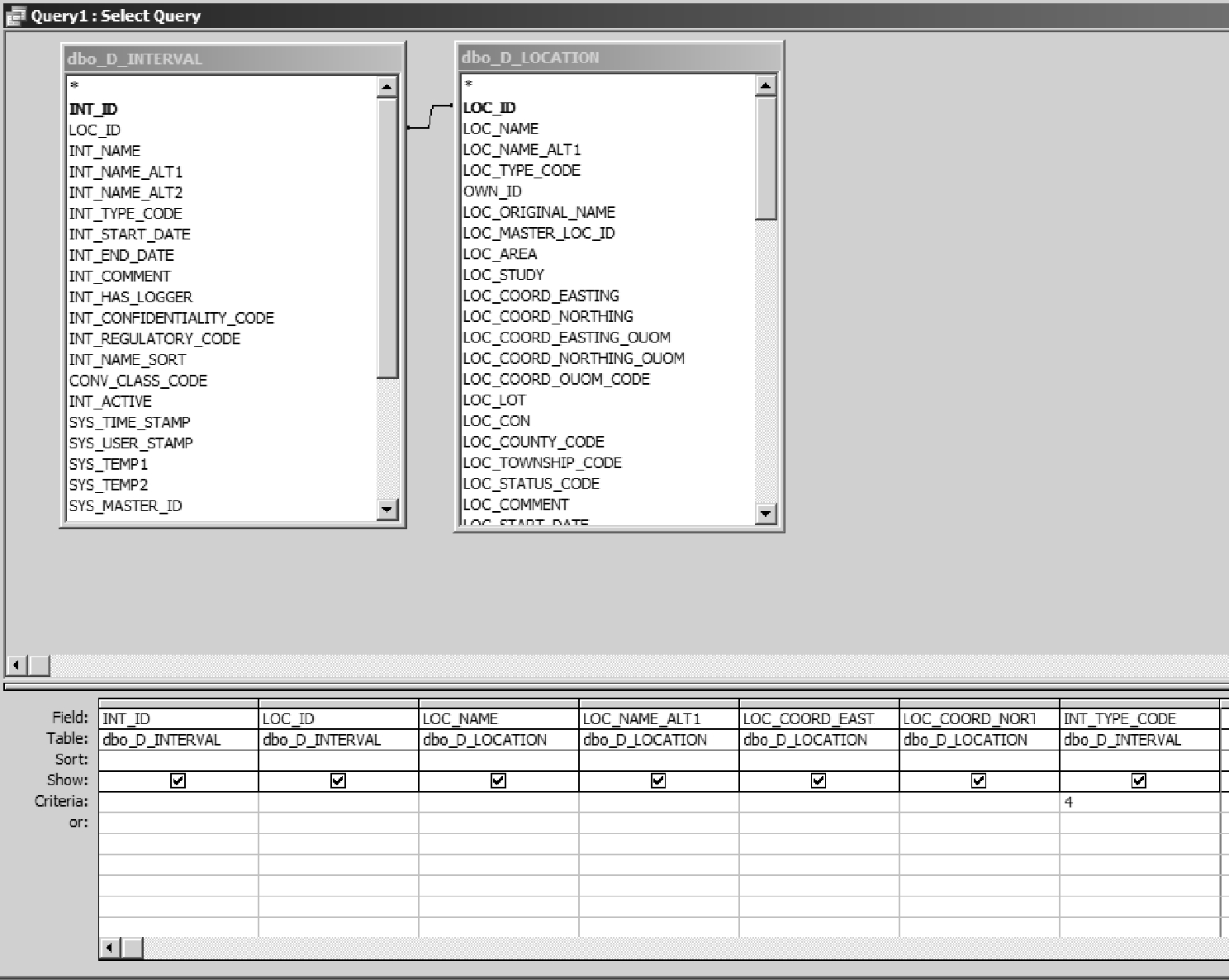 This question is somewhat complicated in that multiple tables need to be accessed to produce the result. These include

Any wells found in V_GEN_BOREHOLE_BEDROCK, by design, wells in bedrock - the remainder of the required information is found elsewhere. In this case, the ‘V_General_BHs_Bedrock’ view and D_LOCATION table need to be linked (based on ‘Location ID’ and LOC_ID). This would allow the user to then link to D_BOREHOLE (also based on LOC_ID) in order to determine the BH_ID. This last piece of information allows the user to link to D_BOREHOLE_CONSTRUCTION (based on BH_ID). Finally, the content of CON_DIAMETER can be examined looking, initially for a value of ‘6’. Note that there is no conversion when copying the borehole diameter from CON_DIAMETER_OUOM to CON_DIAMETER. A whole number in CON_DIAMETER, for example ‘6’, likely means ‘6 inches’ - CON_DIAMETER_UNIT_OUOM could also be examined as a check. However, in some cases during data entry, a ‘6 inch’ value could (potentially) have been converted to a width in cm’s or m’s; for completeness, those values (15.2 and 0.152) should be checked as well.

Note that D_BOREHOLE now contains a BH_BEDROCK_ELEV field. When non-NULL, this indicates that the particular borehole has reached bedrock. This field can be used instead of involving the view V_GEN_BOREHOLE_BEDROCK.