Using Microsoft SQL Server Management Studio (MSSQLSM) we’ll assemble all pertinent information for a series of intervals in the database. We’ll use ‘Query Designer’ to build the query. 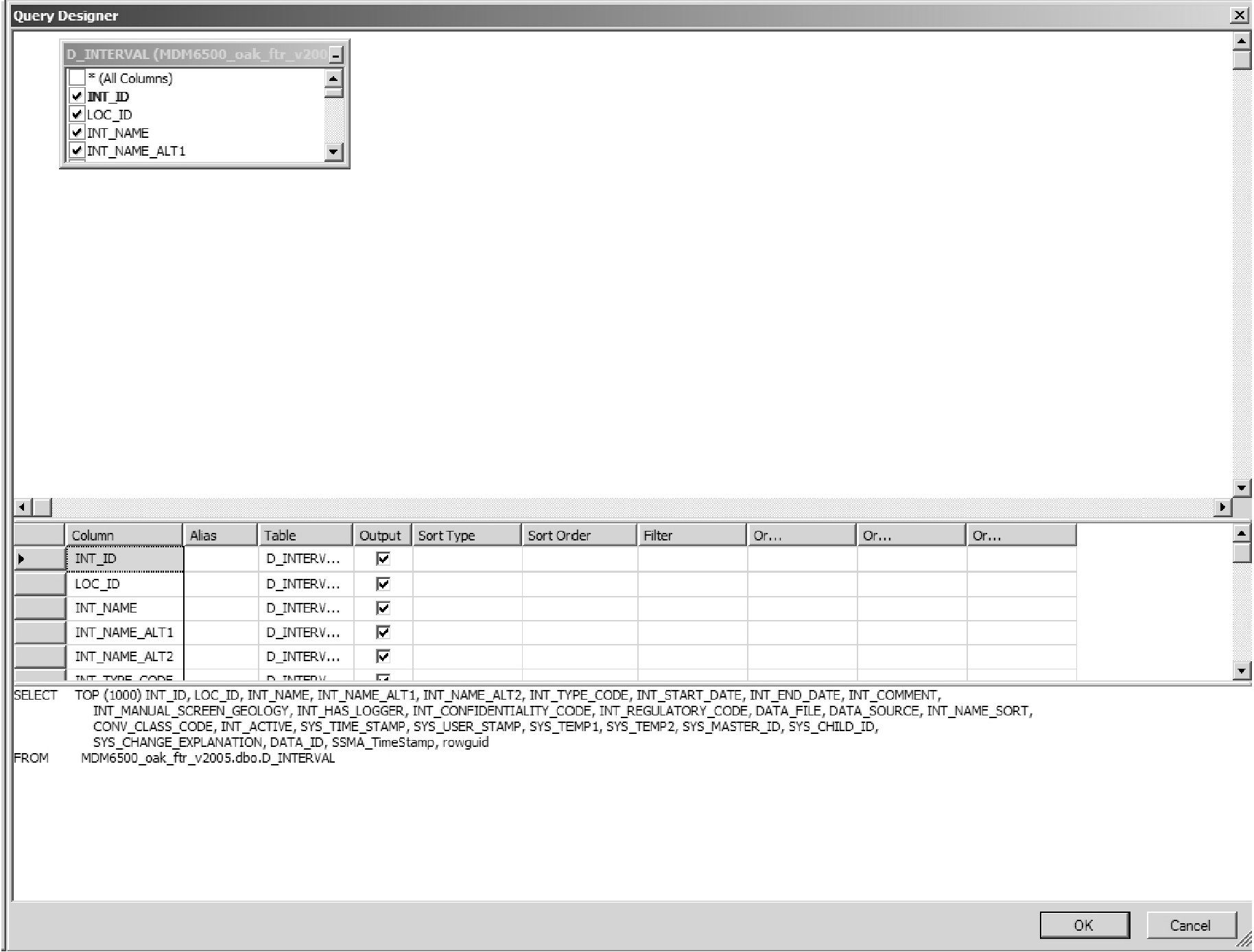 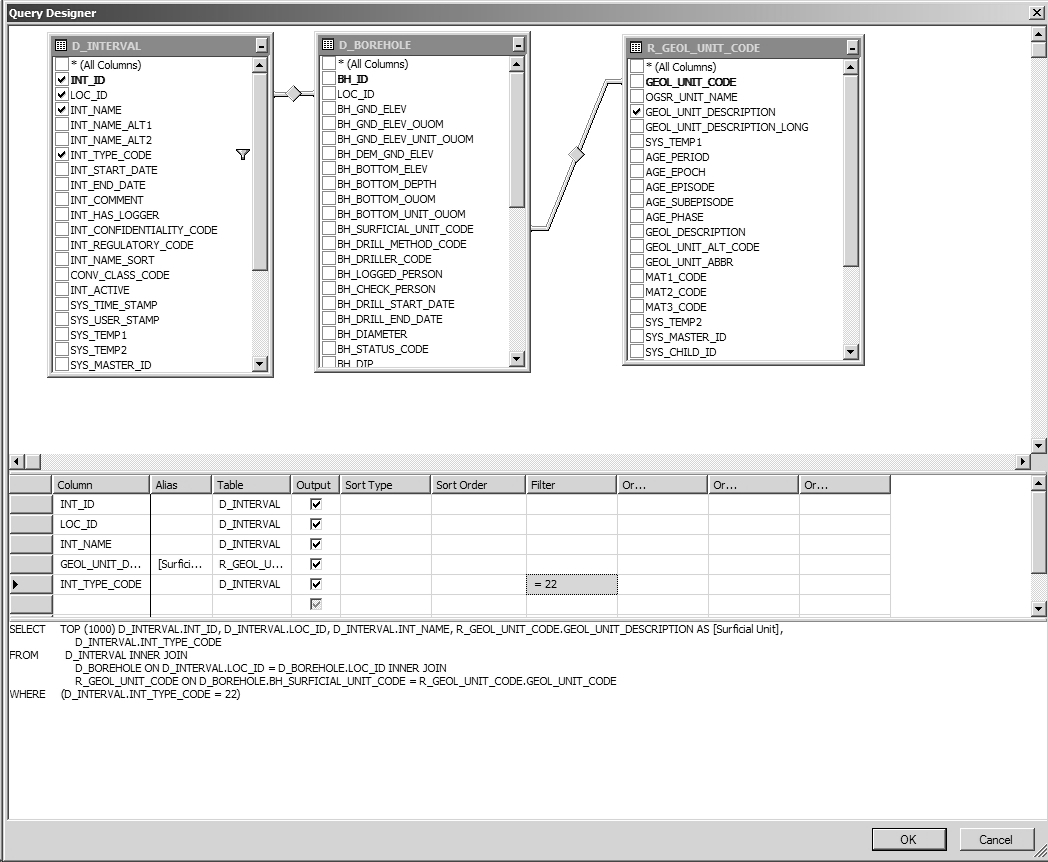 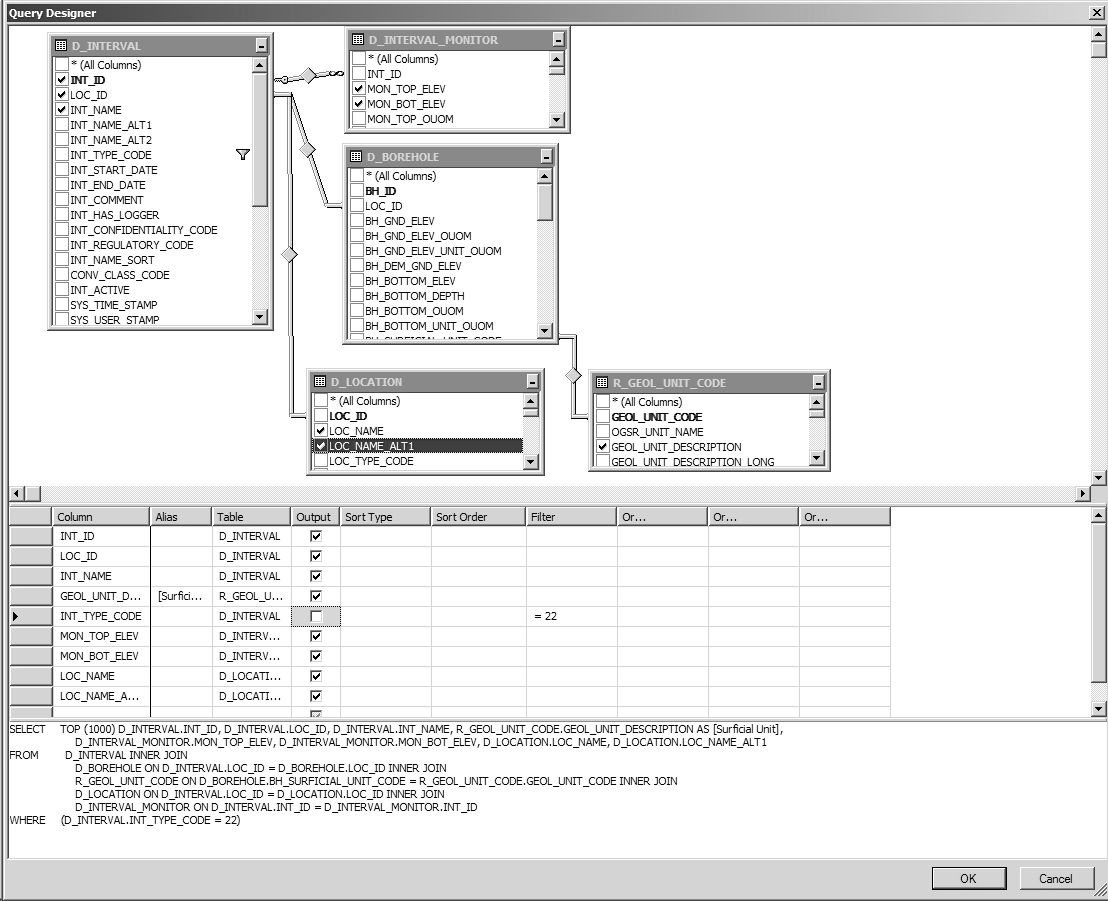 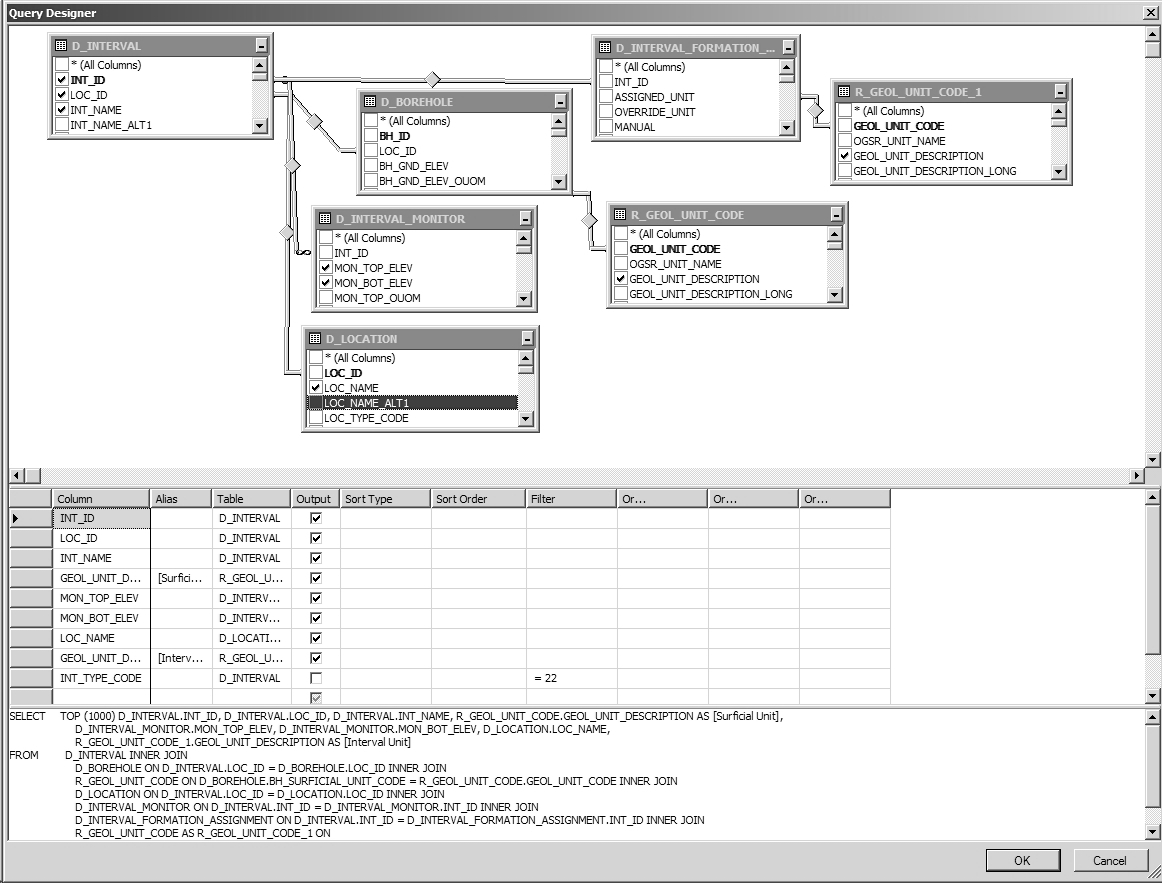 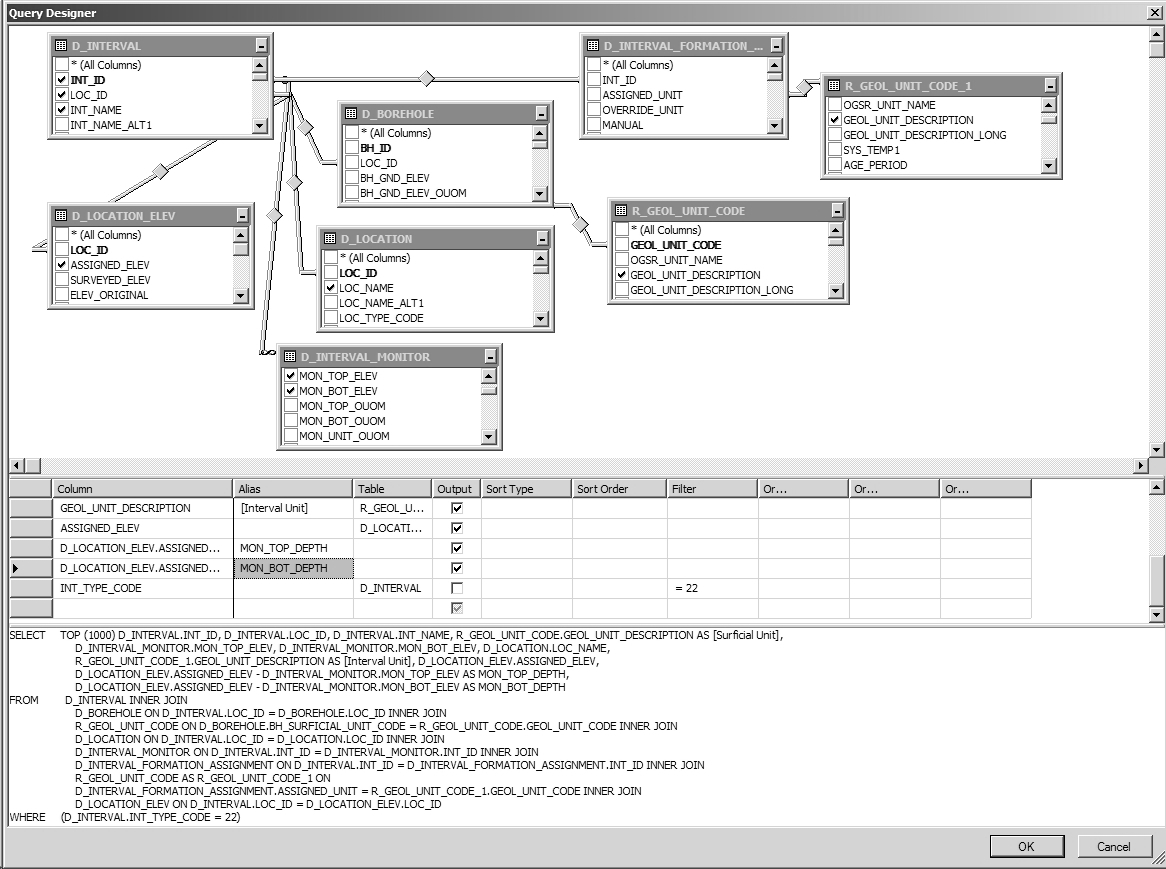 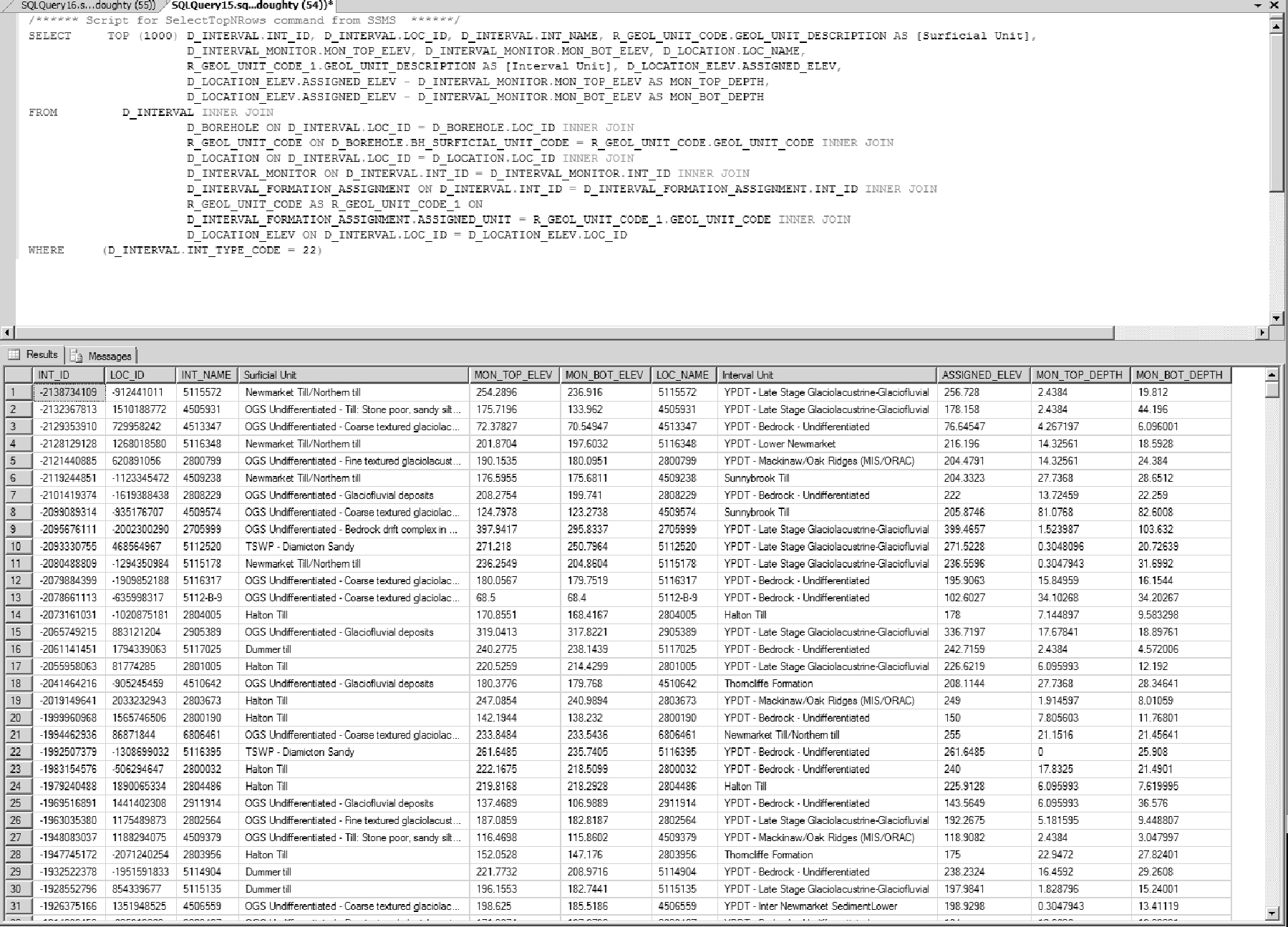 The view V_GEN_HYDROGEOLGOY reproduces automatically some of the steps described in the previous example. We’ll again use MSSQLMS but, this time, using the view instead.

Refer to Section 2.3.4 for details regarding the formatting of laboratory/chemistry data for import into the ORMGP database. As two tables need to be populated (i.e. D_INTERVAL_TEMPORAL_1A/1B) with this information (the first with details regarding the sample - e.g. sample date, interval sampled against, laboratory details, etc … - while the second will contain the actual results of the analysis), data import is best accomplished using the SiteFX tool (though it can be accomplished, albeit with slightly more difficulty, using only SQL commands).

When in SiteFX, the data import option is found under ‘Data - Import Data - From Files’ and selecting ‘Load Data’ from the resultant dialog box. The program then checks the file (in this case, an Access ‘.mdb’ file; alternate file formats can be used) for data contents. Import columns/fields are listed as well as the number of rows present in the file itself. 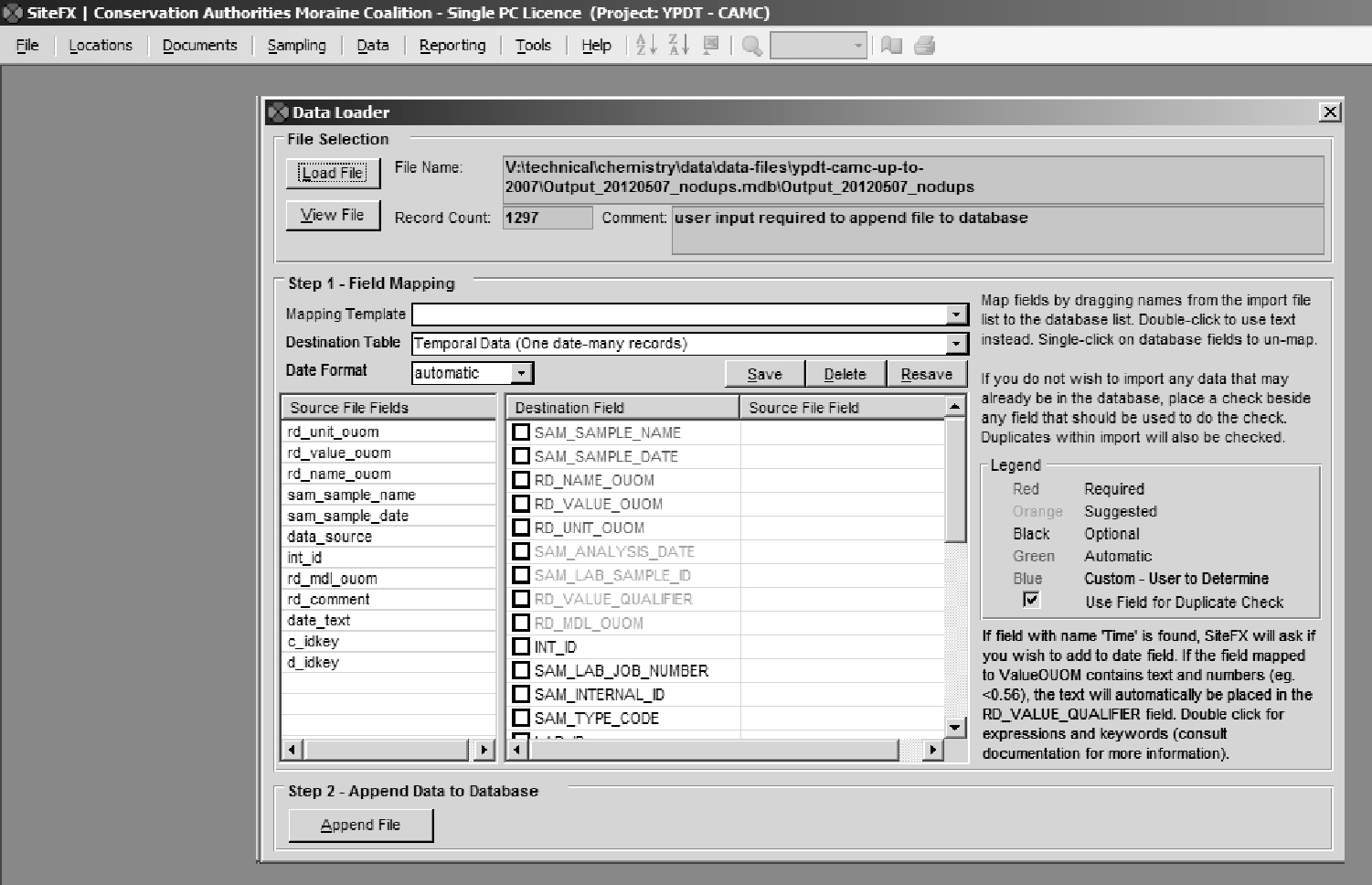 The ‘Destination Table’ should be ‘Temporal (one date, many records)’. When importing water levels, alternatively, the selection would then be ‘D_INTERVAL_TEMPORAL_2 (one date, one record)’. The ‘date’ in both these cases actually corresponds to a date-time combination. The user would then ‘map’ the import columns/fields to the matching columns/fields within the database itself - SiteFX lists both the required and suggested fields that should be populated. In the example, the import fields have been named to match the names of the destination fields. 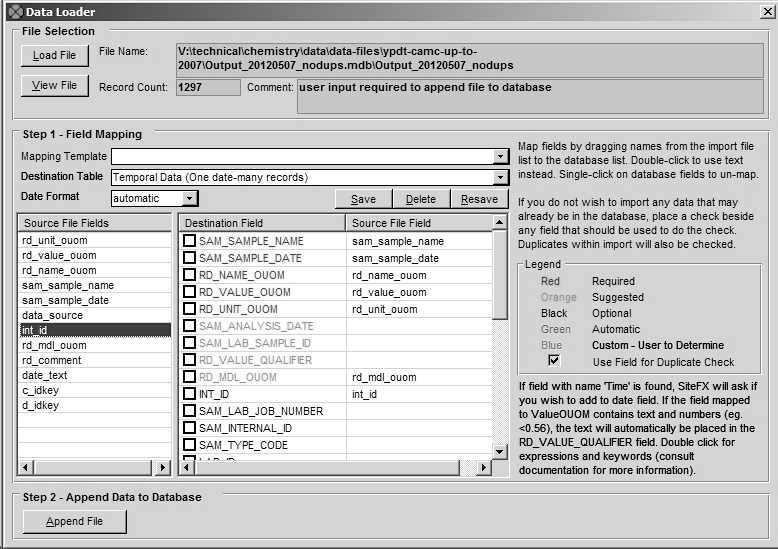 Selecting ‘Append File’ will load the information into the database - SiteFX returns a success or failure upon completion. In addition to populating the temporal tables, the program adds an entry into D_DATA_SOURCE that can be used for tracking - the sample itself and all sample analyses can be identified with the appropriate DATA_ID. However, SiteFX does not populate the DATA_DESCRIPTION field - this should be done by the user. The result is shown.

When temporal data is imported into the database through SiteFX, the program keeps a record of the transaction and its details. If at some point in the future it’s determined that the information was erroneous, SiteFX can back-out the data (i.e. remove it from the database) with little effort. This would not be case to remove the information by hand.

In order to simplify information the average of available results is taken. For time-step analysis (e.g. daily or monthly time-steps, as used in recharge analysis) this information needs to be averaged based upon the specified time interval (dependent upon data availability). This is accomplished through a conversion of the date-time field RD_DATE in D_INTERVAL_TEMPORAL_2 and a grouping of matching dates. 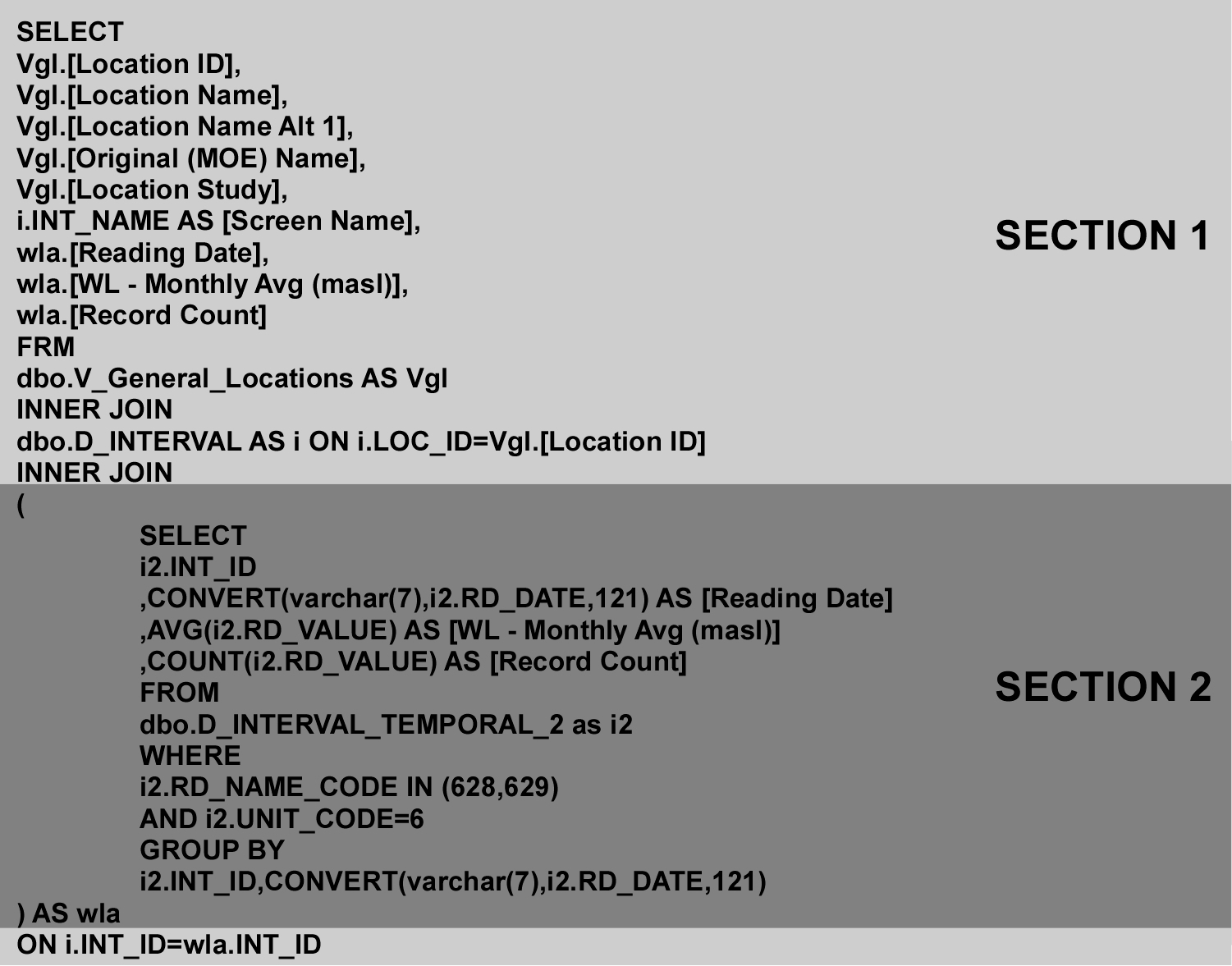 For ‘Section 2’, we’re returning the interval identifier, the date (in the form ‘yyyy-mm’), the average water level (called ‘WL - Monthly Avg (masl)’) and the total number of values (a count; called ‘Reading Count’) used to calculate the average.

For ‘Section 1’, we’re combining the results returned from ‘Section 2’ (referenced as ‘wla’) with information concerning the interval and location associated with it. This is accomplished through ‘joining’ ‘Section 2’ with that general location view (i.e. V_General_Locations; ‘aliased’ here as ‘vgl’). Refer to Appendix A for details regarding the use of the ‘SELECT’ and ‘INNER JOIN’ SQL statements.

For temperature, the RD_NAME_CODE used is ‘369’ (‘ Temperature (Air)’; water temperatures use a different code) and the UNIT_CODE would then be ‘3’ (‘C’; degrees celsius). These would then be used to extract the RD_VALUE from D_INTERVAL_TEMPORAL_2. Otherwise the statement is similar. 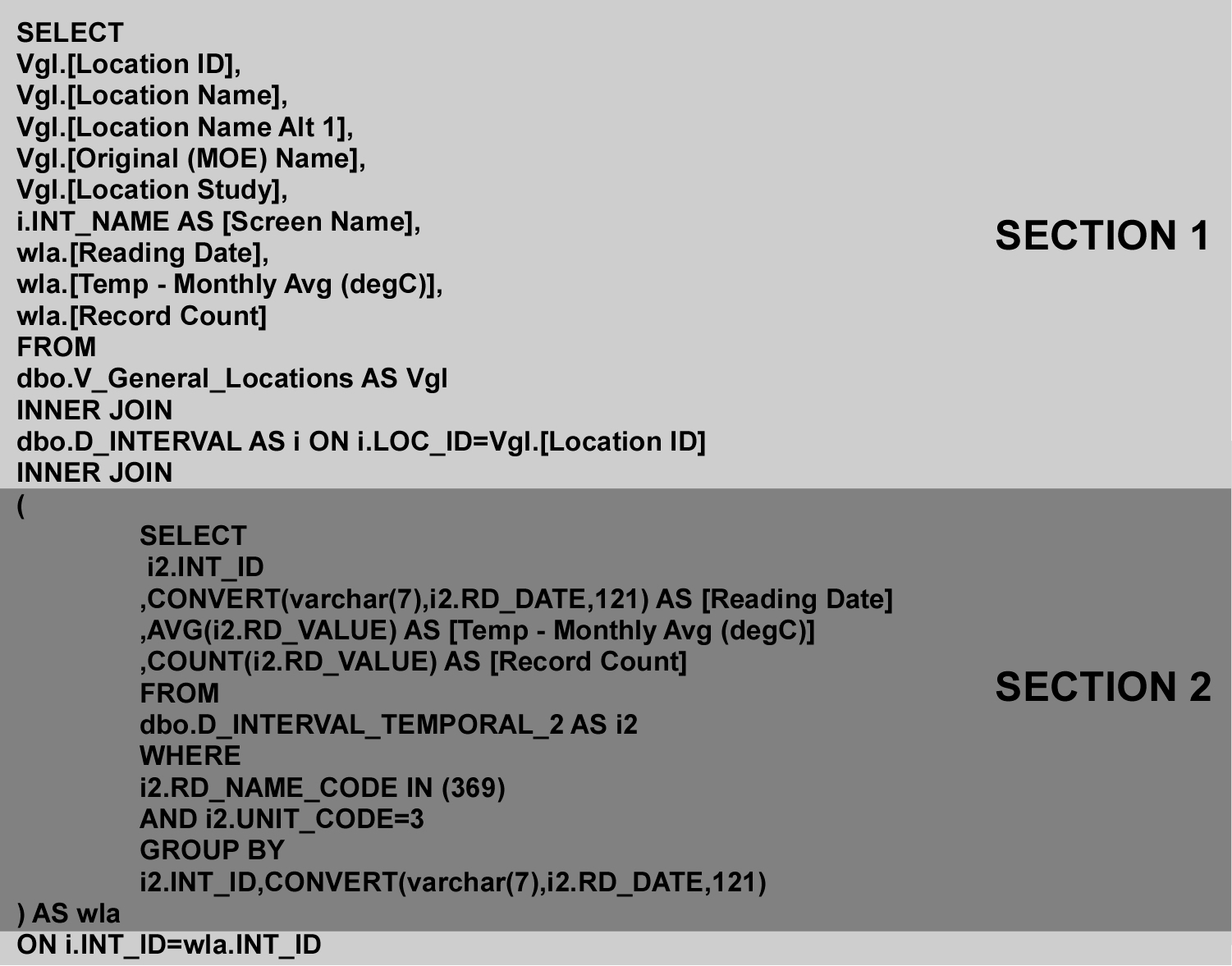 With the (example) results

Precipitation, the last parameter we’re determining monthly values for, uses an RD_NAME_CODE of ‘551’ (‘ Precipitation - Day’) with a UNIT_CODE of ‘21’ (‘mm’). Instead of determining the average, though, here we’re looking at the total precipitation for each month. This would then be of the form 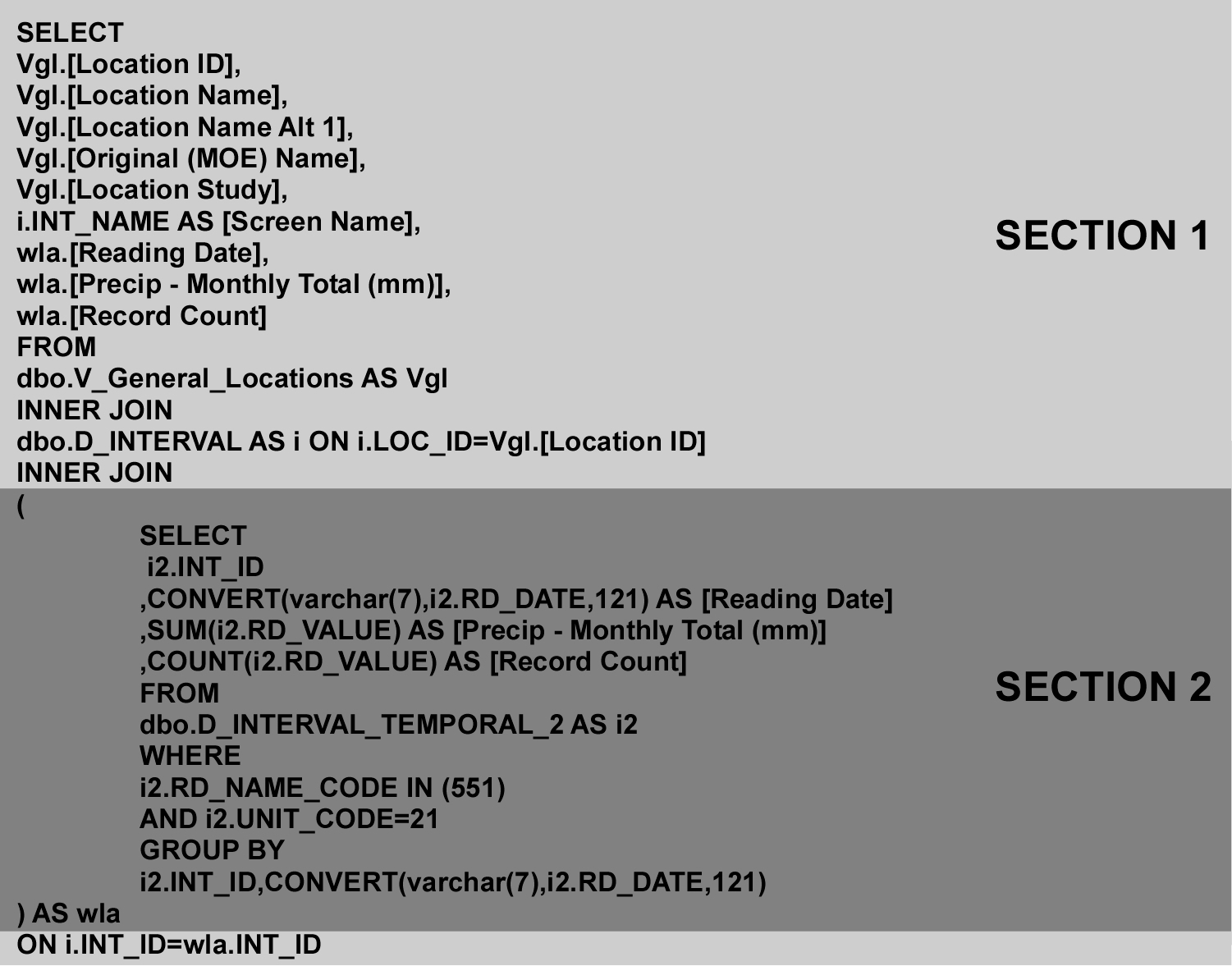 where you can see the AVG keyword has been modified to SUM. This allows a total to be calculated of all the grouped RD_VALUE’s. Example results would then be